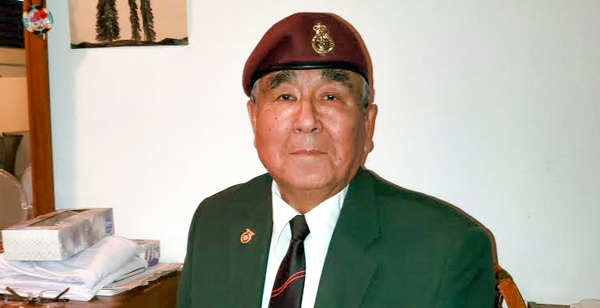 Emile Highway is serving his second term as the president of the Prince Albert branch of the Saskatchewan First Nations Veterans Association. Photo submitted

Highway attended Guy Hill Indian Residential School near the Pas, Manitoba until Grade 7 and refused to go back for Grade 8.

Highway is a member of the Peter Ballantyne Cree Nation and was born near Reindeer River.

“There was no industry where I was born,” he said. “There was no employment. It was a tough time in those days. There weren’t any rations.”

Highway enlisted in the Canadian Armed Forces in 1962. By then, at age 19, he had experience in traditional work on the land and wanted to prove to his family that he had grown up. Highway said he noticed a difference between himself and the non-Indigenous soldiers at basic training in Calgary.

“The white soldiers were better educated,” Highway said. “Many of them came out of high school. I'm not a high school graduate. Many of them never had any work experience. I had been already commercial fishing and trapping. I noticed right away that I was more mature.”

While serving, Highway wrote and received letters from his father, Eli Highway, and other family members.

“That meant a lot to me,” he said. “I always looked forward to receiving mail from northern Saskatchewan every four months or so.”

“There’s pride and joy in wearing the uniform and serving your country,” he said. “I made a lot of friends. I wanted to see the world. I got to go overseas. I went to the Middle East. I had no problems learning the military life. The three square meals a day helped.”

The SFNVA’s main goals are to close the gap in the quality of life between First Nations and non-First Nations veterans and their families and to raise awareness about the contributions of Indigenous soldiers.

“I think that’s very important,” Emile said. “We are the forgotten soldiers. We keep on recruiting and trying to get people to join and help educate people about what our people did in the wars. We have get-togethers. We meet at powwows to get a chance to visit and talk about our loved ones who never came back.”

Emile has been making a lot of phone calls during the COVID-19 pandemic to stay in contact with SFNVA members.

“Part of my job is to make society at large aware that Aboriginal people signed up by the thousands in the two world wars. Those are real heroes. It’s personal for me.”