Elder Profile: Urban migration through the eyes of a Regina kokum 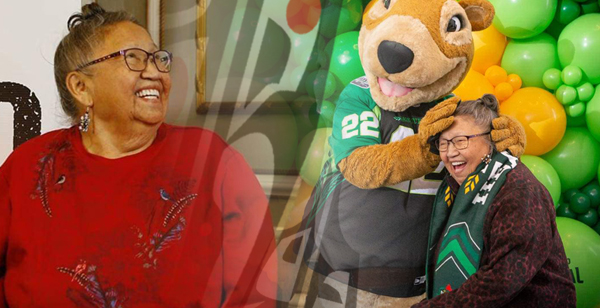 Beloved Regina Elder Lillian Piapot shares her story of life moving from the reserve and into the city more than 50 years ago. She shed some light on some forgotten history of the province. Photo supplied

In the late 1960s Ross Thatcher’s Liberal government created the Housing for People of Native Ancestry program and families were plucked from the reserve and placed in cities like Regina and Moose Jaw.

In 1969, Lillian Piapot and her children were one such family.

Although she was 28, at the time, she and her children had never lived in a home with running water, indoor plumbing much less owned a television, but that all changed when they moved into Regina.

“My kids would play with the lights and turn the faucets on and off,” said Piapot. “They were scared of the TV because they never seen one before.”

The 81-year-old has spent 53 years in Regina, but her story began on the Piapot First Nation located about 30 minutes northeast of Regina.

Like others of her generation, she attended both Indian Residential School and Indian Day school.

Despite the experience, Piapot had a desire to learn, but was denied the opportunity.

“When we saw the car, with the writing on the side we would run and hide,” said Piapot.

She remembered children being taken, but didn’t know where they went. Some of the kids ended up in Indian Residential Schools while others were victims of the 60s Scoop and adopted to non-Indigenous families.

In the late 1960s the province got involved in the apprehension of Indigenous children.

From 1967 to 1969 the Province of Saskatchewan piloted the Adopt an Indian or Metis Program. During this time it was common for Indigenous children to appear in adoption advertisements in the local paper or on TV.

Piapot, was the eldest of 15 children, but said some of her siblings didn’t survive childhood. It was common for children to die from illnesses like chicken pox, mumps, measles and whooping cough because vaccines did not exist yet.

As the eldest grandchild, she was raised by her grandmother which was customary at the time. This traditional practice continues today among many First Nation families.

Piapot’s mother married a man from another reserve and according to the Indian Act she automatically transferred to her new husband’s reserve. This clause was amended in 1985 under Bill C-31.

“Women didn’t have many rights back then,” said Piapot.

Unfortunately, her younger siblings became part of the 60s Scoop and she didn’t see them for many years.

When Piapot was around 16 she was married to an older man.

“It was an arranged marriage,” she said.

Piapot had seven children, but lost her eldest child in infancy. She and her husband eventually separated.

Piapot said when she was still living on the reserve most homes didn’t even have electricity. Everyone hauled water daily, cut wood for heat and used oil lamps for light.

“We were poor, but we cared for one another,” she said.

One day her brother-in-law showed up at her place and said come with me we have a house for you with furniture and you don’t need anything.

She got in the car with her children and was taken to her first home in Regina.

“It was on 13th Avenue, there were a lot of (First Nation) families along that street,” said Piapot.

The experience was overwhelming at times.

There were no programs to help Indigenous people integrate to city life, but as a single mom she found her way by connecting with the Manpower program.

Her first job was at the University of Regina as a cleaner, but she also cleaned homes for non-Indigenous families.

She earned a reputation for being a good worker, so she was never without a job, which is something she is proud to say.

“I didn’t say much,” said Piapot. “I liked to be quiet and just observe people.”

Things have changed a lot since then.

Piapot has found her voice and is an advocate for herself and for others. She supports many worthwhile causes like MMIW, 60s Scoop survivor groups grandmothers groups, YWCA, women’s groups, support groups for those in the justice system, cultural groups and others.

Piapot has watched the city grow and change and says some things have gotten better while others have not.

Despite a dependence on a walker to get around, Piapot is an active and well respected member of the Regina community.

Tracy Desjarlais spends a lot of time with Piapot as her helper, which is a role she cherishes.

“My Kokum Lillian means a lot to me,” she said. “She has been

Desjarlais said there are very few Elders in Regina, who can speak the Cree language, which has created a demand.

Piapot is humble about her knowledge and says there are many Elders who still speak the language, but there are not enough places for them to sit, visit and talk Cree.

As she gets older, she believes it’s become even more critical for her to speak her language.

“When I get asked to say a prayer for something, I always share a story or a teaching,” said Piapot. “People need to know who we are and what we have been through.”

She retains many of the cultural values and teachings she was taught by her elders on the reserve.

Like many grandmothers Piapot says she hurts when her grandchildren hurt and rejoices when they achieve their goals.

“I have an architect and a journalist in my family,” she said. “Others have gone on to university.”

Although she’s had more than her share of hardships she chooses to be kind to others and her gentle nature draws people to her.

Most recently, Piapot’s magnetic personality caught the attention of the President and CEO of  the Mosaic Company Joc O’Rourke.

The pair met during a funding announcement at the YWCA in Regina. He heard Piapot had never attended a football game in her life, so he decided to rectify it.

O’Rourke made certain her first game was memorable by inviting her to the Grey Cup game and giving her the star treatment that included new Roughrider gear, transportation to and from the game, VIP seating and a room at the Hotel Saskatchewan.

Although football “wasn’t her cup of tea”, she enjoyed the opportunity to share a little about the Cree culture with those she met.

Piapot said the best part of the day was listening to Teagan Littlechief sing part of the national anthem in Cree.

Recent health issues have slowed her down, but she says as soon as she’s able she will reconnect with the youth at the Miller Comprehensive High School where she served as the resident elder.