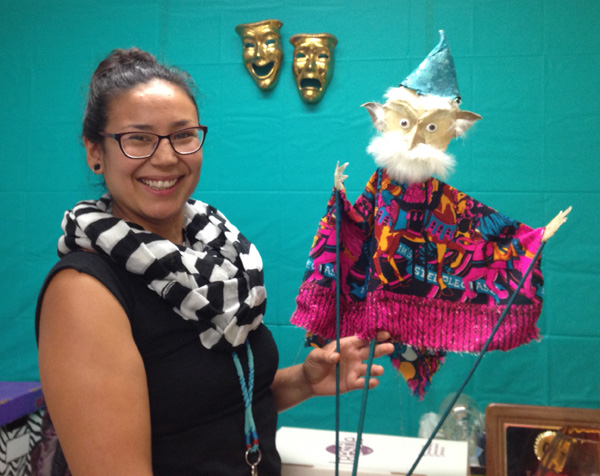 As part of her professional development over the summer, Lacey Eninew made a puppet. It’s one more tool she intends to share with students at the Lac La Ronge Indian Band’s Senator Myles Venne School this year. In her role as Community Research Associate for a project funded by the Saskatchewan Health Research Foundation (SHRF), Eninew engages young people in drama activities.

“The idea of these drama games is to break down walls and bring youth out of their shell,” she says. “Their puppets can say things that they can’t.”

This is the second year of the two-year project, and Eninew, working with students from Grade 5-12, came away from last year with quite a few learnings.

“When I assumed something didn’t work, I was often proved wrong.  What I learned was to come in without any assumptions, or expectations, and a lot of trust,” she says.

That trust paid off when she worked with a group of Grade 6, 7 & 8 students as they wrote a poem, and then successfully performed a dramatization of it at the Prince Albert Grand Council Fine Arts Festival in the spring.

For students in Grades 10 to 12, the drama program is a credited elective.

The ones that sign up for it are “usually those who don’t want to take Phys Ed,” she says, smiling because she was previously the Physical Education teacher at the school.

However, it is Eninew’s background as a visual artist and actor, including performances with the Saskatchewan Native Theatre Company, that suits her for her current role, says Dr. Linda Goulet, a professor with the First Nations University of Canada.

Goulet is the Team Leader for the La Ronge project, one of several teams in the province that the SHRF grant is funding that are using arts-based methods to enhance the health of First Nations and Métis youth. It is an extension of a research project that has been going on in the File Hills Qu’Appelle Tribal Council area for the past ten years.

What distinguishes this community-based research from traditional research, says Goulet, is that it is co-directed.

“They are gathering research on their own lives,” she explains, “rather than just us being the only ones reflecting on what art does for them, and how art helps them become healthier, or enhances their well-being.”

Eninew has already seen this in her work.

“The simplest games teach them the most profound lessons,” she says. “We’d have tennis balls and we would throw them in patterns around a circle. Sometimes we’d have five tennis balls going, but it would have the same pattern so you would throw to the same person. At the end they got so good at it, but at the beginning it was really rough.”

What one of the students picked up from that small game, says Eninew, was “to have patience with yourself when you’re learning something.”

The following student journal entry is another illustration of the positive impact of the program:

“It’s the games and warm-ups I think that turns our day around if we are having a bad morning. I’m looking forward to Monday to see what games we’ll play.”