Despite knowing of prejudice, Jesse McGhee chose to follow McGhee relatives into Service 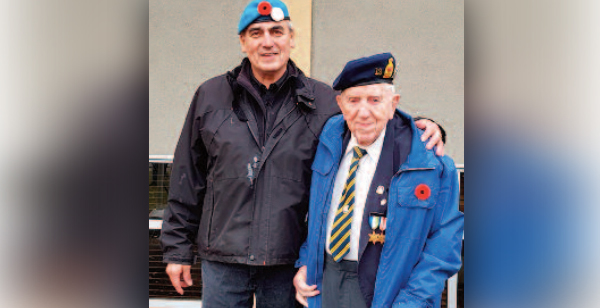 Jesse McGhee with a veteran in Terrace, B.C. Photo submitted

It’s 11:00 am. November 11th. The country goes quiet. Men and women in uniform stand side by side for this moment of silence. Their thoughts turn to the heroes who so selflessly served our country during war and conflict. These brave warriors put their lives on the line for our freedom and peace.

Every year on Remembrance Day, enlisted men and women, veterans, family members, civilians, soldiers, schools, cities, and towns pay homage to these brave men and women who fought in the war. Many of them will recall bittersweet memories of those they have loved and lost, but they will also remember the sacrifices that needed to be made.

In that moment of silence let’s think of the First Nations men and women who fought in the war. Think of the fallen soldiers we proudly consider war heroes and ask yourself, ‘Why would someone willingly put themselves in the line of fire?’

“I guess the only thing that can be said is that First Nations people were promised in the treaties that we would never be conscripted unlike any other ethnicity, so First Nations veterans have always volunteered,” said Jesse McGhee, from the George Gordon First Nation.

For McGhee, November 11th isn’t just about the poppies and showing his support. For the McGhee men, being a soldier is a family tradition. As a child, McGhee always knew he was going to carry on that tradition. The men in his family chose to fight bravely and with honor and he would do the same.

The McGhee men wore their uniforms with pride. War did not discriminate. McGhee recalls his Uncle Dan Bird who spoke about his experience.

“Over in Europe a soldier was not defined by his race, color, or creed. [He/She] ...was free to go where ever liberating prisoners of war camps, but when he returned in 1945 Indian soldiers were told to get back on the reserve where we belonged...take off that uniform. You see reserves had made the Indian political prisoners of war,” he said.

This did not thwart McGhee’s desire to become a soldier. Like many Canadians, he is a peacekeeper at heart, but his grandfather, his father, and his uncles’ legacies are ingrained in him. He enlisted in the army at the young age of 19, serving from 1984 to 1991 in the Princess Patricia Canadian Light Infantry.

McGhee’s legacy had begun with his grandfather Alexander Pelletier, WW1, who enlisted in the first battalion of the Princess Patricia Canadian Light Infantry (PPCLI). His dad Andrew McGhee enlisted in 1942, also becoming a soldier of the PPCLI. The list goes on to include McGhee’s paternal uncles, Wes McGhee, Melvin McGhee and Emerson 'Emit' McGhee, PPCLI; and, maternal uncles Dan Bird, Sydney Gordon, and Daniel Pelletier, PPCLI.

As we can all see McGhee comes from a long line of brothers in arms and he is very proud of his family’s accomplishments and efforts. Although he is now retired, he proudly and excitedly said if he had to do it again, he would do it in a heartbeat.