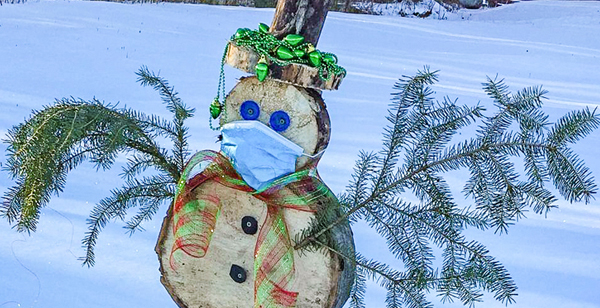 Children North works with about 300 children throughout parts of Northern Saskatchewan but will be providing gifts for the other kids in those homes. About 1,100 children will be receiving presents. Men of the North provided $10,500 for gifts, according to founder Christopher Merasty. Photo supplied by Daina Lapworth

The Christmas Spirit is flowing through the staff of Children North this holiday season after a gift giving campaign brought the tri-communities of the La Ronge area together to find toys for 1,100 children in northern Saskatchewan.

The gifts were purchased at businesses in the tri-communities, which includes La Ronge, Air Ronge and the Lac La Ronge Indian Band, after local businesses, Men of the North and the RCMP grouped together to play Santa Claus.

“It was amazing. The community supported us so much,” said Daina Lapworth, executive director of Children North, an early childhood intervention program that works with about 300 kids throughout the northern and eastern portion of the province.

“There’s also a whole bunch of other kids in the (homes besides the 300)… It’s not fair to buy a gift for just one child in the house,” she said.

Children North provides a range of child and family support services in the tri-communities and beyond. It was selected for a toy drive from the local business owners of The Bargain Shop for children in the program.

Then men’s support group Men of the North stepped in, donating $10,500 for Christmas gifts, board games for the families and gingerbread houses.

With the exception of the gingerbread houses, which were purchased from Costco in Saskatoon, the gifts and toys were purchased within the surrounding communities, Lapworth said.

“This is the first time we’ve been able to do something of this magnitude, ever, and we’ve been going since 1985,” Lapworth said. “It’s been a little overwhelming but fantastic.”

The gifts were wrapped on Monday and Tuesday by staff and volunteers, including Lapworth. The gifts will then be transported north and stored by the RCMP before they’re delivered around Christmas Eve.

“It’s been a troubling time for a lot of families, a lot of communities, so we’re definitely going to show our support with Christmas gifts,” said Christopher Merasty, founder and CEO of Men of the North.

The COVID-19 pandemic has resulted in lockdowns in some northern communities, including travel restrictions, making it difficult for people to travel south and shop.

Merasty said the decision to help Children North was because of the work the organization does in the north and northeast portions of Sask.

The RCMP became involved when Merasty reached out to them, according to Sgt. Josh Hallett.

“They’ve asked if we would be part of the distribution of the gifts, just in some of the more remote areas where they don’t have access to,” Hallett said.

The RCMP will assist in delivering gifts to families throughout the communities of the La La Ronge Indian Band, he said.