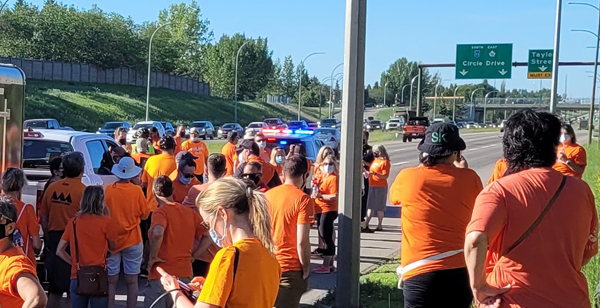 Saskatoon Tribal Council (STC) Chief Mark Arcand walked the 27 kilometre-length of Circle Drive in Saskatoon in an effort to bring major change to the city. Arcand is raising awareness of the harms caused by residential school and is calling for John A. MacDonald Road to be renamed Reconciliation Road.

“There's not enough awareness or education for people who still don't believe what happened to our Indigenous people at Residential Schools. This is an opportunity for improvement, education, and understanding,” Arcand told Eagle Feather News during his walk on Monday morning.

Arcand and a group of supporters set out from the STC office on Packham Avenue at 7:00 AM. Within a couple hours, the group had reached Preston Crossing, amid steady honks of support from passing vehicles. The University of Saskatchewan, Nutrien, and the Saskatoon Chamber of Commerce have been supportive to the call to action, said Arcand.

Opponents to the name change have been outspoken on social media, arguing renaming the street would erase an important part of Canada's history.

“This is about education. This isn't about changing history or rewriting history. If we could change history, I would change Residential Schools so our people would have never had to have gone through that. Education of what happened to our Indigenous people could improve the lives of people today,” said Arcand. 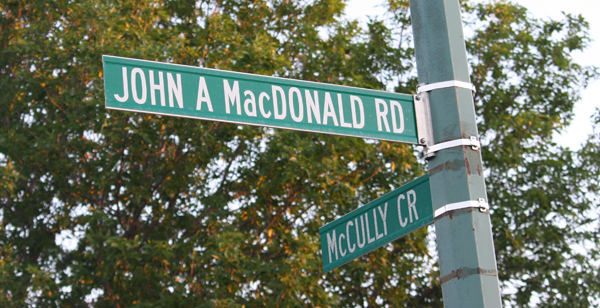 “This isn't about hurting people's feelings or being disrespectful. It's about working together and having a mutual understanding.”

Response from those who live on the current John A. MacDonald Road in Confederation Park has been mixed, said Arcand, with some supporting the name change while others feel they will be inconvenienced by an address change. But that's not the issue, he said.

“This issue is it's named after the person who started Residential Schools. In 2021, things haven't improved greatly because we still have a lot of kids in child welfare, a lot of poverty and incarceration, a lot of distrust in the healthcare system… so we're not trying to change history, we're trying to correct some wrongs so we all can have a quality of life.”

City Councillor David Kirton will be bringing forward of Notice of Motion on June 21, asking city administration to begin the process of a name change.

“This is just one more small step in the long road of Reconciliation,” said Kirton in a statement. “I still continue on a personal journey to understand how the Residential School system affected my family. We cannot hope to achieve reconciliation without taking such actions.”

“It is time to make this change and honour the truths that Residential School Survivors have shared about the impacts of these schools through generations,” said Clark in a statement. “We can work together between Indigenous and non-Indigenous communities to ensure this is a process that builds understanding of our shared history, while creating a city that reflects the spirit of living in right relations together on this land.”