Canada must renew “sense of urgency” around Calls to Action: Commissioners 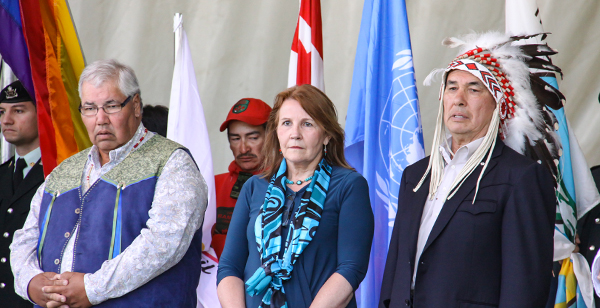 Truth and Reconciliation Commissioners from left, Chair, Senator Murray Sinclair, Marie Wilson and Hereditary Chief Willie Littlechild at the opening of the TRC National Gathering in Saskatoon in 2012. Photo by John Lagimodiere

The need for reconciliation and healing is more urgent now than ever, members of the Truth and Reconciliation Commission (TRC) said on the fifth anniversary of the release of their final report with its 94 Calls to Action.

He said the National Inquiry into Missing and Murdered Indigenous Women and Girls, “gave us a clear and stark picture of the horrendous levels of violence facing First Nations, Inuit and Métis women and girls and two spirit persons.

“(It) confirmed very clearly that nothing less than transformative change will end this violence,” he said.

Commissioners Murray Sinclair, Marie Wilson and Wilton Littlechild, gathered (via Zoom and Skype), to call on Canadians to renew the “sense of urgency, purpose and unity,” that met their 94 Calls to Action in 2015.

Although reconciliation has become a buzzword since the report was released, there is no way to know how well or poorly Canada is doing on reconciliation because the government has not yet established the tool to measure success, Wilson said.

“Essential foundations for reconciliation have yet to be implemented,” Littlechild told reporters in a virtual news conference on December 15.

“Despite government commitment in some jurisdictions, there’s a danger of losing gains that we have made,” he said.

The federal government has committed to two important pillars of reconciliation identified in the Calls to Action.

It has promised to establish the National Council For Reconciliation – an independent oversight body of Indigenous and non-Indigenous members to monitor and report annually on Canada’s progress on reconciliation, including governments and all sectors of Canadian society.

Work was underway to establish the National Council when the pandemic struck in March. Government staff are still working out the council’s mandate, financial backing, authority and membership, Littlechild said.

“The National Council is essential to track, assess and report on all aspects of reconciliation,” he said.

Ottawa has also introduced a bill to affirm and implement the United Nations Declaration on the Rights of Indigenous People (UNDRIP), which the Commissioners say sets out the framework for reconciliation.

Even so, “nothing is certain,” Littlechild said, noting that six provinces have called for that legislation to be delayed.

Between 2009 and 2015 the TRC traveled the country hearing from almost 7,000 Indian residential school survivors, who described hardships and abuse they endured as children and the lasting harm caused to their families, languages, cultures and communities.

Many of the survivors have died without seeing the changes in Canadian society they hoped for, Littlechild said.

Minister of Indigenous Crown Relations Carolyn Bennett, issued a statement on the anniversary, saying the residential school system “is a tragedy born from colonial policies in Canadian history… We acknowledge the intergenerational trauma that is still being felt today from damaging colonial policies.”

Bennett said 80 per cent of the 76 Calls to Action for which the federal government is responsible, “are completed or well underway.”

“Federal legislation respecting Indigenous languages, investments in education, health, commemoration, and efforts to support the safety and security of Indigenous women and girls, LGBTQ and Two-Spirit people are playing an essential role in rebuilding our relationships with First Nations, Inuit and Métis,” she stated.

She also referred to child welfare legislation, a bill to create a National Day for Truth and Reconciliation, a bill to have the Citizenship oath promise to respect Indigenous rights and Treaties, along with a yet to be released new citizenship guide with Indigenous history, the National Inquiry into MMIWG and the UNDRIP bill.

Littlechild also acknowledged positive changes: The National Centre for Truth and Reconciliation holds the statements and records gathered by the commission; teachers and school children have embraced Orange Shirt Day in commemoration of the residential school experience; and Canada has designated Residential Schools as an event of national and historical significance.

Yet progress has been “uneven” he said, noting that in some places school systems are adopting new curricula that highlight Indigenous values, traditions and knowledge but there are also efforts to roll back the progress in public school curricula in Alberta and Ontario.

“This is not only a barrier to reconciliation, it’s also an attack upon the truth,” he said.

Wilson noted that systemic racism in the health care system and “profound inequalities” have made the risk from COVID 19 greater for Indigenous people.

“We are calling on federal, provincial and territorial governments, and indeed all Canadians to renew their commitments and redouble their efforts toward reconciliation and healing,” she said.

“Reconciliation requires all Canadians to come together with resolution and common purpose. It is not too late, and indeed, we are still in early days.

“Survivors told us that Canada must never forget the harm that was once done to the most vulnerable- the children,” she said.

“This is not an anniversary for celebration but one for national honesty and urgent and meaningful action.”