Book Review: #IdleNoMore: And the Remaking of Canada by Ken Coates 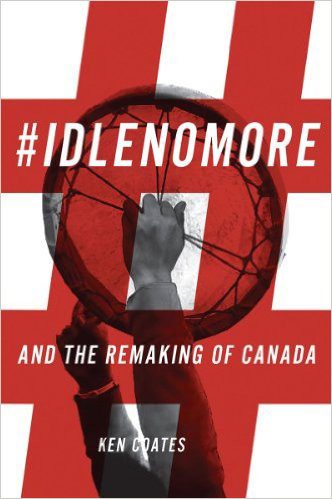 In #IdleNoMore: And the Remaking of Canada, Ken Coates examines the Idle No More movement from its understated beginnings in November 2012 to its climax in the late winter of 2013. While Idle No More can be compared to other social movements, such as Occupy Wall Street and the Arab Spring, it differs from them in several important ways. It is these differences that make the movement truly remarkable, including its lack of an official spokesperson, its lack of affiliation with political leaders, mainstream ideologies, and party elites, and its lack of an organizational structure beyond organizers’ commitment to its grassroots origins and inspiration. Indeed a convincing argument can be made that Idle No More contributes a set of best practices for peaceful, exuberant, and community-driven protest. With its energy, direction, and focus coming almost entirely from the public, it is greater than the sum of its actions and events, having galvanized discussion and instilled pride in a new generation of Indigenous Canadians on a wide assortment of issues and challenges to be faced in the coming years. Idle No More should be viewed as a watershed event, and Coates’ timely and informative book offers a convincing argument that it could one day be remembered as the most successful social movement in Canadian history.

Coates compares Idle No More to a prairie summer storm, coalescing from initially modest gusts of wind, from teach-ins, postings on Facebook, Twitter, and radio spots, before gaining speed and force from the interest and energy of participants, until it was something more formidable, an energized, cathartic, and celebratory social movement. One can begin to understand Idle No More only when it is recognized as more than a social movement, casting itself in the passions and concerns of Aboriginal Canadians, more akin to a social phenomenon. Idle No More cannot be defined in terms of its talking points, the issues and themes about which it sought to instill awareness, but must be seen in its unbridled power to transform those who gathered within it. Coates does an admirable job pulling together the many strands of Idle No More, the teach-ins, the “round dance revolution,” the peaceful rallies in shopping malls and outside houses of parliament, as well as the tributary events that threatened to saddle Idle No More with a political agenda (such as Chief Theresa Spence’s hunger strike and the attempt of the Assembly of First Nations to meet with the Prime Minister). Yet, Idle No More, Coates insists, cannot be reduced to these events and the issues to which they drew attention. In fact, its organizers guarded the movement against those who attempted to couch Idle No More in their own logic and terms. Far from articulating a single agenda, the movement’s power lay in providing a venue for a broad assortment of public issues to travel its lengths, such as respect for treaty rights, social discrimination, environmental policy, policies threatening Aboriginal self-determination, and missing Aboriginal women, to name but a few. Beyond the issues were the cultural works that became associated with Idle No More, the dancing, the singing, the chanting, and the storytelling. The book offers a wealth of commentary from participants, bursting at the seams with Twitter messages, speech excerpts, stories of protest marches, and the canny siren calls of organizers whose medium was as much a part of the message as the issues. Deserving special note is the scholarly eye Coates employs to properly historicize this movement’s demands for equality and justice, relating Idle No More to patterns and forms of social protest unbounded by time and place.

Among the many insights to be taken away from #IdleNoMore is the degree to which the movement re-affirmed the collective agency of Canadian First Nations people, awakening the spirit of self-determination and pride among its participants. It was this transformative power of Idle No More that Coates’ book conveys to its readers. Idle No More came to stand for the revolutionary hopes of people gathered within it, a people more firmly rooted in nationhood. The movement was but the vehicle, the medium, for a change occurring within and across generations. Coates’ #IdleNoMore is a worthy guide, a much-needed testament, to this movement’s brief, but powerful, moment.

This book is available at your local book store or from SaskBooks.