The UN special rapporteur on the rights of Indigenous peoples made two stops in Saskatchewan on his nine day tour through Canada.

James Anaya began his journey in British Columbia before finding his way into northern Saskatchewan.

Buffalo River Dene Nation Chief Lance Bayette, along with Federation of Saskatchewan Indian Nations Chief Perry Bellegarde, welcomed Anaya and brought him up to speed on the challenges that the northern community has been facing for decades.

The reserve and a few other surrounding communities were displaced when the Federal Government created the Cold Lake Air Weapons Range, which is still active today. Chief Bayette says his people have faced starvation, poverty and other hardships since being removed from their traditional territory. Hunters and other traditional land users have been forcibly removed from the range on several occasions resulting in ongoing court cases and legal battles over the land and the right to use it. 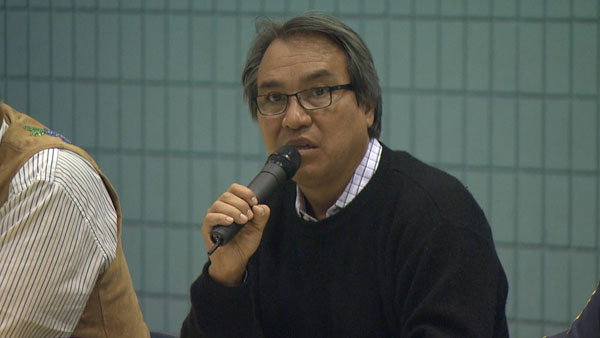 Photo by Larissa Burnouf
Anaya heard from First Nations, Inuit and Métis people about the issues they face including poverty, educational and housing differences and missing and murdered Aboriginal women. He also visited reserves and communities in Quebec, Ontario, Manitoba and Alberta, all with similar stories and issues. During a press conference in Ottawa at the end of his journey, Anaya said Canada and its Indigenous peoples are facing "a crisis." He continued on, stating Canada and the Harper Government must reverse course to avoid a "rocky" relationship with the countries' Indigenous peoples. Anaya also touched on the growing gap between the Aboriginal and non-Aboriginal communities in Canada, finding that First Nations people are still suffering from "multiple legacies of the history of colonization, treaty infringements, assault on their cultures and land dispossession."  Anaya said through his dealings with First Nations people, he witnessed an alarming distrust in the Federal and Provincial Governments by Aboriginal people.

His visits, however, did not only include the countries Indigenous' communities; he also met with Aboriginal Affairs and Northern Development Minister Bernard Valcourt and the RCMP. He stated in Ottawa that the Harper Government needs to start repairing the relationship with the Indigenous population, more specifically the gap in on-reserve education funding, the repeated calls for an inquiry into increasing number of missing and murder Aboriginal women in Canada and their stance in dealings with the Truth and Reconciliation Commission.

"In order for the trust that needs to be built, these kinds of steps need to be taken," said Anaya. He warned that the path forward must incorporate the participation of the Indigenous peoples and address their concerns.

"These matters need to be reconsidered."

Anaya spoke at length about the issues still facing the surviving generations of residential school students, stating that Ottawa needs to allow the TRC's mandate to finish its work completely, as it is set to expire in July 2014. He said the dark history and legacy of the residential schools still haunts and "continues to cast a long shadow of despair" on the Aboriginal community in Canada, adding that "many of the dire social and economic problems faced by Aboriginal peoples are directly linked to that experience."

"I am not going to accept the premise they are not going to move on these issues, and, yes, I have discussed these matters with the government officials I spoke with. There was no expression of negativity toward me in my making these recommendations," said Anaya.