Tireless role models legacy to live on in sports 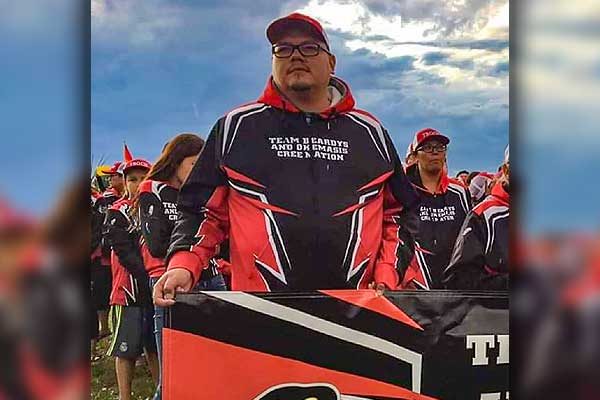 Dale 'Duder' Mike may have been listed as a Community Sports Coordinator, but in truth, 'community pillar', 'role model', and 'tireless optimist' may have been more appropriate tags to apply to the young leader.

“He was truly selfless,” said Shannon Leigh, sister of Mike.

“Everyone you would ever talk to would have their own special story about him, about his generosity and kindness, and their respect for him,” she said.

Beardy's and Okemasis Cree Nation (BOCN) lost a cornerstone of their community on June 29th, when Mike was killed in a single vehicle rollover. Mike was only 33, but in those years living and working at BOCN, he made a huge impact through his impassioned commitment to youth sports.

Sports coordinator was an unlikely landing spot for Mike, who knew little about the finer details required to run several athletics programs. But like everything he did, Mike committed to it fully and enthusiastically.

“Before (running the program), sports wasn't his thing. He had to take time to learn all the rules of all the sports. And instead of going to the parents or learning from the kids, he would talk to the kids individually. He made time for everyone. He made them feel like individuals instead of athletes,” said Leigh.

In his three years running the BOCN program, Mike expanded the program from just soccer, volleyball, hockey, and badminton to include: basketball, track and field, smash ball, baseball, curling and table tennis. But more importantly, he took time to reach out to youth individually to let them know there was a place for them on a team.

“Duder came up to me at my brother's hockey practice and said 'I need one more girl for the Winter Games'. I wasn't confident in myself to be in different sports back then,” said Alissa Gardipy, 16, who Mike had the confidence in to immediately make the Skip for the girl's curling team.

In addition to curling, Gardipy now plays soccer, volleyball, and basketball, much owing to Mike's encouragement.

“He gave me so much more confidence. If it wasn't for him, I don't think I'd be playing all these sports.”

These stories of empowering youth are far from uncommon, says Leigh, who often worked with her brother coaching and facilitating sports programs. She said regardless of a kid's strengths or weaknesses, he would create a space for them. If they couldn't skate, he would put them on the soccer team. If the soccer pitch wasn't their thing, there was table tennis or curling. And if they were too young to play, they could be an equipment manager.

“He believed that working with the youth and empowering them, not to be the best, but to bring their best, would create honour in themselves and respect for hard work,” said Leigh.

“He believed that by building these children up, it would create strong leaders for our nation and our world.”

Lane Desjarlais, 18, from BOCN, also shared a story of Mike's enthusiastic support. When Desjarlais placed third in a badminton tournament, Mike was sure to meet Desjarlais disappointment with encouragement.

“He was so caring. He was always pumping me up and made me feel so good when he talked to me. He was always about positivity,” he said. “I think he'll be remembered forever here.”

Mike's ambitions didn't end with youth sports. After coming out as a two-spirit man in his early twenties, Leigh said he freed himself from what people thought he should have been, and became passionate about creating safe places for all people. Leigh said that after the sports programs were solid enough for him to step back, he envisioned becoming a BOCN council member, and perhaps eventually running for Chief.

“(After the last election), people were calling him and messaging him, asking why his name wasn't on the ballot,” said Leigh. “The people in our community had so much trust and faith in him that he could be a great leader for our Nation. He was already, without being on council.”

A lifelong resident of BOCN, Leigh said her brother wanted to remain in his home First Nation to continue making it a better place. The legacy he left behind may do exactly that.

“I want people to remember my brother was good hearted (...) there was a man behind the track suit that loved his family,” said Leigh. “He was always present with us. He made sure we knew he loved us, and not just with saying the words. If my brother loved you, you really felt it.”