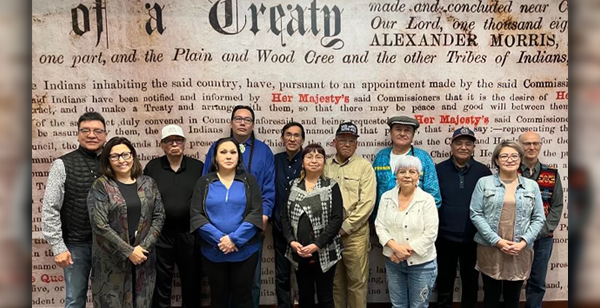 Milton Tootoosis (back left) and the YXE Cree Speakers Society are using grant funding to consult with language speakers on revitalizing Cree, as well as creating a conference in 2023. Photo supplied

Milton Tootoosis has a very clear and direct impression on the state of Cree language in Saskatchewan.

“We are in a crisis,” he said. Tootoosis, member of Poundmaker Cree Nation and the Chief Economic Reconciliation Officer at the Saskatoon Regional Economic Development Authority (SREDA), decided to do something about it and applied for a project grant through Heritage Canada. To his surprise, in December, Tootoosis was notified his proposal had been approved.

“The ultimate goal is to consult with language speakers themselves, not just academics or politicians or educational institutions, but talk to the people at the grassroots level to get ideas and advice on how to retain, rejuvenate, and strengthen the Plains Cree language,” he said.

The language revitalization project will be managed by YXE Cree Speakers Society (YXE CSS) — a new group Tootoosis helped create in January to gather and consult with fluent Cree speakers.

The group is currently consulting with fluent speakers, traditional Knowledge Keepers and Elders, and will soon start planning a large Cree speakers conference for next year.

“I’ve been watching and observing the trends and noticing a higher and higher percentage of our young people not being able to speak Cree,” said Tootoosis. “You go to cultural events like powwows and you see singers and dancers who don’t speak their own language.” He believes more needs to be done.

One of the goals is to create a final report for the government and communities that includes an inventory of all the tools and instruments used to preserve the Plains Cree language, a list of recommendations, and perhaps even their own Calls to Action.

“I think (this project) will raise awareness of the fact that we’re still here despite the genocide that has occurred, and is still happening to our people.” said Tootoosis. “We are resilient, we are strong, and there’s a movement to keep our language alive.”

An important development with the YXE CSS has been an increasing inclination from Elders, who previously may have resisted being documented through newer forms of technology, to be audio or video recorded while speaking their mother tongue.

The recording of their voices will serve as a useful tool going forward, said Tootoosis.

But the challenge of preserving language has deep roots, said Tootoosis. He points to assimilation policies envisioned by John A. McDonald over a century ago still being alive in our society, as well as colonization and Residential School impacts, which made many Cree or Indigenous language speakers feel as though they could or should not speak their mother tongue.