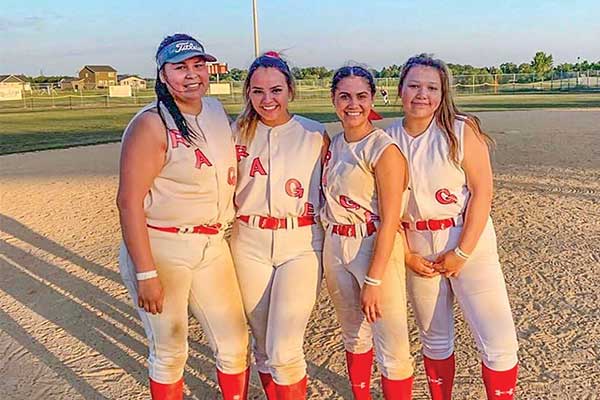 The cancellation of the 2020 North American Indigenous Games (NAIG) due to Coronavirus pandemic concerns has left many Indigenous athletes in limbo, including Piapot First Nations softball player Kachina Skye Kaiswatum.

“Unfortunately because of safety concerns, we are not able to practice as a team. However, we have been doing some practice at home,” said Kaiswatum.

The organizers of NAIG have announced that the event will take place next summer but no official date has been disclosed.

While the girls wait for the pandemic to blow over, they have been begun to practice independently.

Kaiswatum misses coming together once a month with the other Under 19s to prepare for NAIG.

“Since we started meeting up in January, it has become a get together that I have grown to become very fond of. We … were supposed to meet in March but then the virus happened,” she said.

“I grew up around sports at a young age. (My family has) always had a thing for baseball and stuff like that. My parents played a huge role in helping me cultivate my skills,” said Kaiswatum, crediting her family with getting her involved in playing sports and supporting her through the years.

Now 18, she began her journey with softball at the age of six and has gone on become an excellent pitcher.

Kaiswatum has been playing in the Regina Minor Softball League (RMSL) since 2007 and said she has had a remarkable experience on the team. RMSL currently consists of 23 teams divided into three divisions. The games, held at Douglas Park, have become a way for the players and supporters to form a bond.

“It has been good for me,” she said. “I know some people who have faced racism growing up, especially playing on the league’s teams in Saskatchewan. I have friends who have had bad experiences but for me, I have not experienced any of that. They have always treated me good.”

According to Kaiswatum, her Indigenous team, Regina Rage, is more than just a sports team – it is a family. Kaiswatum credits her team for introducing many of her friends, including best friend Sara Sinclair.

“My favourite thing about playing softball definitely has to be gaining friends from the team. I have made so many cool friends growing up from playing softball. The friendships are very special and important to me,” Kaiswatum said.

Sinclair, a member of George Gordon First Nation, has known Kaiswatum since 2012, when they first played together.

“I’ve known her since I was eleven and I started playing ball with her,” Sinclair said. “She was my pitcher and I was her back catcher. Throughout the years, we have played on different teams, but for summer games, we played together. We have won gold three times at the summer games playing for Touchwood Agency Tribal Council against File Hills Qu’Appelle Tribal Council on reserve.”

Both Kaiswatum and Sinclair made it to the last round of tryouts for NAIG before the cancellation, which has not discouraged the women as they eagerly anticipate the new dates for the competition. Kaiswatum will be completing Grade 12 this year, while Sinclair is finishing her first year of Film Production at the University of Regina.

Karlene Pruden, Indigenous Students Director of the U of R Student’s Union and a proponent of female Indigenous athletes, is inspired by the women’s successes. Pruden who hails from Little Saskatchewan First Nation, Manitoba, in Treaty 2 Territory, believes that it is important Indigenous communities continue to celebrate athletes like Kaiswatum and Sinclair.

“Sports became a way that many Indigenous youths have used to escape the common misconceptions of the reserve life, so sports become an escape from pain and hurt they feel within themselves,” Pruden continued. “Athletes I have spoken to express the happiness and empowerment they feel when they play a sport they love. To young, aspiring athletes, a community’s support is the greatest support you can ever have.”