Security guards part of the mine site “family” 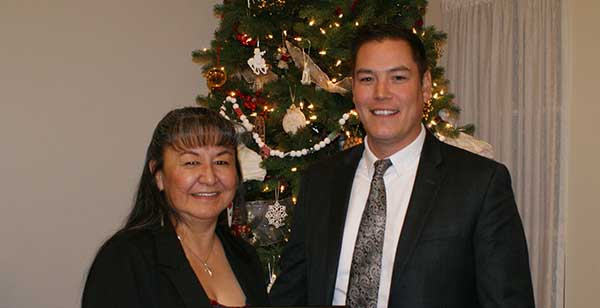 When Cigar Lake security officer Catherine Nagus saw a wolf attacking a man on the ground at the northern mine site, she jumped into a truck and drove at them, scaring the wolf off in the process.

She radioed for backup and helped the 26-year-old man press on his bleeding neck as the wolf stared at them and three more watched from the trees on that August night in 2016.

“I never took my eyes off that wolf,” she said.

“I have four boys myself and I just wanted to protect him. Any mother would have done the same,” she said.

The man recovered from his injuries and Nagus received the St. John Ambulance Life Saving Award from the Lieutenant Governor.

She seldom needs her first aid skills but, in those moments,, she remembered her training.

Nagus, now a supervisor, says she has enjoyed her 15 years in the security field, which has allowed her to own a house and pay the bills. She works for two weeks on site and then has two weeks off.

“She’s a grandmother so you don’t need to be really young and ultra fit, you just have to be the right kind of caring person,” he said.

“She doesn’t stand down from things.”

About 80 per cent of the security staff they employ at Saskatchewan mines are Indigenous.

They control access at the entry gate at the federally licensed nuclear facility, help check in passengers at the mine’s airport and do regular patrols throughout the site.

More than half the security staff are Indigenous people from the north.

“These are part of our site families. They’re very important to our success as an organization,” Decker said.

His counterpart at Cigar Lake, Kevin Edeen, said the security staff have built good relationships with everyone they interact with.

“We don’t run into problems a lot of the time because they’ve built those relationships. People feel comfortable coming and talking with them.

“It’s invaluable what they provide to us. They’ve always been a bright spot for us to have as part of the team,” Edeen said.

His preparing people for the security industry includes the 40-hour standard training that is required for security guard certification in Saskatchewan, but also includes a second 40-hour week training in tactics and techniques such as communication for de-escalation, use of force and handcuffing techniques, self defense and safety awareness.

“That higher level of training is helpful for the Indigenous participants and their communities. It’s job creation,” Pedersen said.

Security staff are in a leadership position when something goes wrong. They’ve been trained in how to react and what to do and how to stay calm and rational and apply what they know, he said.

A person who has learned to take leadership in stressful situations can move into leadership roles in other areas of life and are needed in all communities, Pedersen said.