Ribbon skirts help one woman share her story of empowerment 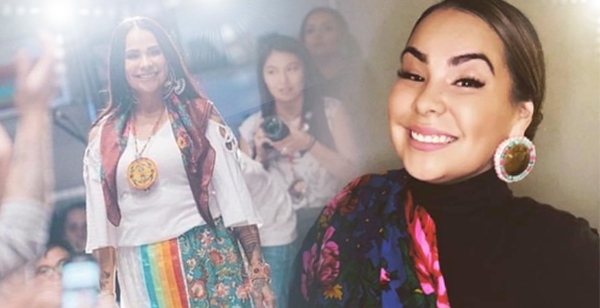 Tala Tootoosis at the 2019 Otapiakki Calgary Fashion Show. The designer has a strong connection with ribbon skirts because they helped her recover from an abusive situation. She found her strength and now shares her knowledge with others about the importance of self-care and body autonomy. Photo by Tala Tootoosis

Having a talent for making ribbon skirts and promoting them with a message toward self-care and healthy relationships is a passion Tala Tootoosis takes seriously.

She uses her status as a high-profile Indigenous designer to share her knowledge with others.

“I can teach you how to make a ribbon skirt but creating a safe healthy environment for healing and prayer, that is something that we need to work to develop,” said Tootoosis. “For me, I took a negative experience with my ribbon skirts and turned it into something that is a symbol of protecting myself, to deflect those predators who use their authority to get closer to someone vulnerable.”

She is open about her story of sexual abuse and the cultural exploitation she experienced, to shine light on the difficult topic.

As a mental health therapist and body-autonomy-and-consent workshop facilitator, Tootoosis is determined to educate Indigenous people about the dangers of sexual predators.

She said it’s a serious issue that needs to be addressed for several reasons.

“These convos, we don’t have enough of them,” said Tootoosis. “When a young person seeks help and then is taken advantage of in a relationship of trust, they give up and end up turning away from ceremony and back to drugs and alcohol. When a disclosure of abuse is made, it’s important to believe them. Being believed is suicide prevention.”

After leaving what she described as “a cult, led by a predator,” she gave away all her ribbon skirts, which were made to the exact specifications of her abuser.

“When I left the cult, I (gave) up beading, quilling and sewing,” said Tootoosis. “I stopped going to ceremony and powwows for two years. I was terrified. I was lucky that I had the support. Getting that support is what made me begin to want to do this work again.”

Tootoosis credits her mother’s love and the education she received from the Saskatoon Sexual Assault Centre for her successful recovery from the abuse.

Once she was ready, she chose to be proactive and help others.

“A lot of what I learned is that it wasn’t my fault,” said Tootoosis. “Not something I wore, or where I went, but it happened because they had an urge to do it. So often we blame ourselves. In our Indigenous way we are taught to take accountability, that is part of our growth.”

During her recovery not only did she learn about victim blaming and rape culture, but she also learned more about healthy relationships and body autonomy.

“We learn through our experiences,” said Tootoosis. “I saw that I could promote body autonomy and safe cultural practices through teaching about the ribbon skirt.”

These days wearing a ribbon skirt is a symbol of self-love and protection. The skirts are also a way to signal to others that ceremonial practices and adornment are meant to honour and respect those taking part.

“I go into ceremony to pray,” said Tootoosis. “I put on my ribbon skirt now and I am protected. When I am in that space, I can practise my body autonomy and say no to any touch or attention that is unwanted.

Once a person sets boundaries, it can be life changing, she explained.

“We get stronger,” said Tootoosis. “It gets easier to apply that same level of assertion everywhere else. It’s all about counteracting that fear mentality.”