Opinion: the importance of Indigenous representation in law

The summer is over, a new school year begins. It is time to embrace change, and transition, and find a routine. In my home, my eldest is starting kindergarten, which for most parents going through this transition it’s mind-blowing. Like how did this happen so fast? As my baby starts her first year on her education journey, I start the first day of my last year of law school. Now to put in the work and balance our new schedule. Here is to another year and more growth. 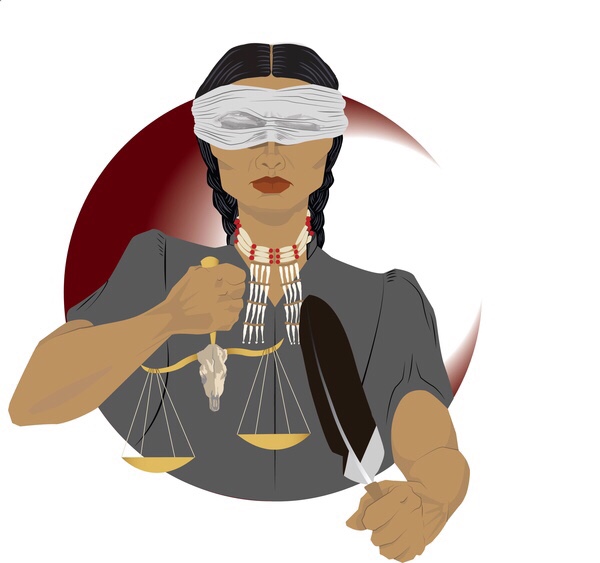 The new logo of the Indigenous Law Students’ Association at the University of Saskatchewan. Photo supplied

Currently, I am the Vice President of Indigenous Relations at the College of Law, University of Saskatchewan. My responsibilities include being on the Law Students Association (LSA) executive and general council and the Indigenous Law Students’ Association (ILSA) executive and general council. My mandate is to bridge Indigenous and non-Indigenous students, being the voice in the LSA meetings where since before this year there was only one Indigenous student present in these meetings. All other VP’s on exec at the college have two representatives each. Since last year the constitution in the college was amended. Now there is a rep for the VP Indigenous Relations position. This year is the first year there will be two Indigenous students on the LSA council and this makes a huge difference.

The U of S is unique for the College of law because of the Wiyasiwewin Mikiwahp Native Law Centre is located here. Many Indigenous scholars have started their careers here who have now gone on to become lawyers, politicians, judges, professors, and people of high influence. This is important to have Indigenous representation especially in our legal system where there are many ongoing violations happening to our people, communities, and land. Rather than remaining stuck in embedded negative colonial stereotypes and biases that have been passed down from generation to generation keeping Indigenous peoples out of the economy and professions, these barriers need to be broken down. At the same time, the weight of trying to teach and show others who we are as a people should not only fall on Indigenous students’ shoulders. This should be community-driven where everyone is able to take the time to unlearn and relearn different worldviews and the truths about the land in which they live and are proud to call home.

Learning the truth can only benefit the future and what we are passing onto our children. I do not want my daughters to grow up in a system facing discrimination. I have a vivid memory as a child being made fun of in my pow wow regalia at age 6 when I wore it to school on a culture day. I was one of the few Indigenous students at an urban school and I quit dancing after this. Truths need to be acknowledged by the wider society. A foreign system was forced on us and in the process of that imposition, it dismantled our own systems that governed us through Indigenous laws.

I want to highlight the new logo the Indigenous Law Students’ Association is proud to introduce this year. As quoted by the president of ILSA, Rheana Worme, “This logo was created by artist Tanis Worme. Lady justice takes a new form as a visibly indigenous woman. Racialized Indigenous women and visible minorities in the legal system undergo unique challenges that we must acknowledge. Lady Justice is blindfolded (due to the ongoing injustices that we are challenged to see/study but overcome as Indigenous students) but her expression of seriousness is still very much felt. In our logo, she is holding the scales of justice in one hand and an eagle feather in the other, signify Indigenous culture’s inherent value in truth-telling. Her judge tabs have been replaced with a bone choker and dentalium shells. The red moon behind her represents the Missing and Murdered Indigenous Women’s calls for justice and is a symbol of protection for all Indigenous women.

“Tanis Worme is an emerging visual artist from Treaty #6 territory. She is Nehiyaw and a member of the Poundmaker Cree Nation with roots to Mistawasis and Kawacatoose First Nations. Her growing body of studio work considers notions of storytelling while questioning the impulse of colonial thought. Tanis is a recent graduate from the Ottawa School of Art. The scope of her practice also includes tattooing, drawing, collage, performance, and sculpture. Tanis is currently a student at the Azrieli School of Architecture & Urbanism at Carleton University.”

It is important to support and highlight Indigenous artists and students. We need to uplift each other and continue to open doors as those who have come before us. Breaking down misrepresentations and creating space for more Indigenous knowledge and youth to have a voice and opportunities to continue to help lead the way for our children.