Op-ed: Indigenous students finally seeing themselves reflected in their teachers 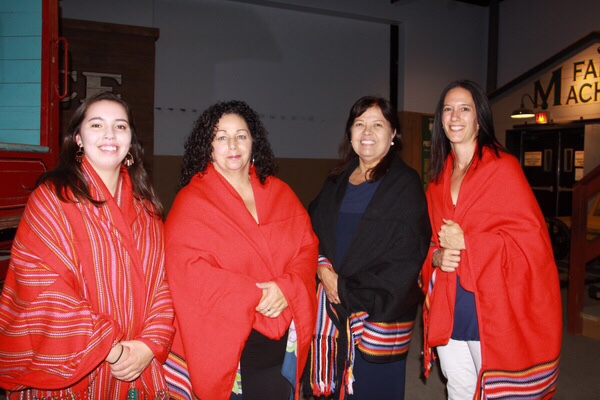 Several Métis women were honoured at the CUMFI Métis Days. These educators were among them and are all alumni or a student of SUNTEP and are leading or soon to be leading Métis educators. From left, student Autumn Larose-Smith, SUNTEP faculty Angie Caron, SUNTEP Director Sheila Pocha, and Oskayak teacher Jacqueline Lavallee. Photo by John Lagimodiere

I wish I had teachers like this when I was back in school. Three of the women above are graduates of the SUNTEP program, and one is due to graduate soon. In the SUNTEP program, they take Métis students and immerse them in their culture and history and build them up as powerful Métis people….and then they make them awesome teachers.

Then they take that skill and cultural knowledge into our class rooms across Saskatchewan to inspire other Indigenous students, and non-Indigenous, and teach curriculum from the Métis perspective. How incredible. And at one time, unheard of.

Looking back with what I know now, our education system and Eurocentric curriculum failed Canadians miserably. They never taught us properly about the treaties. They explained it from the benevolence of the Governments tender heart to save the poor starving Indians. They never taught about the Indian Act or, God forbid, the residential schools.

For the Métis, we received the Governments version of the Métis story. They never talked about the violence our people faced in the Manitoba region following the Manitoba Act. They never talked about the massive land theft that happened. We heard about the mad man Louis Riel, with little or no balance in the story. And most Canadians never were taught about the Métis story post the North West Resistance in 1885. Not one thing. I never heard about the road allowance people until university. You never heard about the farm colony experiments the provincial government set up for us. It was like we disappeared in the fall of 1885 and haven’t come out of our caves until the 2000’s.

The impact of Canadians not understanding Indigenous/Aboriginal rights or treaty rights has led to many myths and misconceptions that have muddied the water in our relationships across this great land. Indigenous folks are seen as a burden and Canadians don’t understand, or appreciate, the wealth that was made available to them after the government and their policies took our land and left us poor.

The poor curriculum really hurt our community as well. The Canadian Race Relations Foundation did a study of 1980’s era history text books in Canada and they found that 80% of all references to Indigenous people were negative or biased. And we, as Indigenous students had to read that about our selves. Not a good thing for the self esteem.

Back in the day, I did not see Métis people in the teaching profession. Now that I know many families from around the province, it turns out we had at least two Métis teachers in my high school. But I never heard once, either of those teachers bring up their back ground or heritage. I was of the era where it just wasn’t talked about. And that mentality slipped down into the student body. Now, decades after my grade 12, I can say for sure there was a dozen or so fellow Indigenous students in my graduating class. And not one time did we ever talk about our heritage to each other. Never. Not promoted, not welcomed. Best to keep that to yourself because there was no benefit to it.

But, thankfully, times have changed. This past generation and the future generations have lots of teachers to role model after. SUNTEP, ITEP and now NISTEP and other innovative programs are bringing teacher education to the communities and those graduates are staying or returning home to bring their knowledge to their relatives and community members.

Curriculum has caught up. It has been legally mandatory to teach Treaty education from K-12 since 2007 and the Office of the Treaty Commissioner has developed excellent curriculum for that. My son learned Métis content in high school that I had to wait to receive until second year University. It wasn’t taught by an Indigenous teacher, but he had a teacher that was professional and cared and taught it in a good way. And that is quite all right.

The change is good news for all of us in Saskatchewan. New generations of Canadian students are getting it. Indigenous students are seeing themselves and their family stories properly reflected in the curriculum. And our young people are seeing professional, credible teachers from their community welcoming them back to school and inspiring them into the future. The times, they are a changing. Almost makes me want to go back to school. Almost.