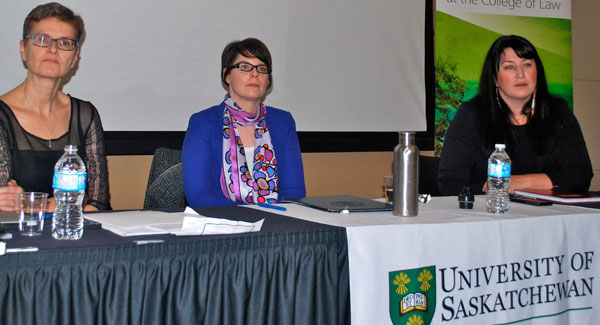 Left to right, Gillian Calder, Karen Drake and Aimee Craft at a panel discussion on the ramifications of the Truth and Reconciliation Commission’s final report for Canadian law schools.

The Truth and Reconciliation Commission says Canadian law schools will need to play a major role if true reconciliation between Indigenous and non-Indigenous peoples is to be achieved.

Legal scholars from across the country were at the University of Saskatchewan on February 1 to discuss the issue.

Amongst its recommendations, the TRC final report says law schools need to ensure students are well versed on the history and legacy of residential schools, the United Nations Declaration on the Rights of Indigenous Peoples, treaties and Indigenous rights.

Gillian Calder is the associate dean of the University of Victoria’s Faculty of Law.

She says the university has encouraged online feedback on the recommendations through something called the TRC Syllabus.

The U of Vic has also tried to teach about Indigenous law beyond the classroom in workshop settings and is in the process of trying to provide access to as many Indigenous law materials as possible.

There are also plans to offer an Indigenous law degree down the road.

Overall, Calder says the TRC’s calls to action for law schools to Indigenize their curricula pose both challenges and opportunities.

“Legal educators have to break the chains of the past where we teach in a very conservative way and this kind of work involves innovation and creativity,” she says. “It involves different layers of action, not just mandatory classes which are important, but there has to be integration of these questions throughout the curriculum.”

Karen Drake, who teaches in the Faculty of Law at Lakehead University, says the school currently offers mandatory courses in the areas of Indigenous legal issues, perspectives and legal traditions.

She says part of the challenge universities face is overcoming the false notion that Indigenous law is a niche area or mandatory courses in the discipline violate academic freedom.

“The reason why we need to get this into law schools is because judges need to know how to apply Indigenous law as law,” Drake says. “And not just see these stories, which are sources of Indigenous law, as fables, as children’s bedtime stories.”

Drake adds academic freedom does not mean professors can teach whatever they want, it means they are free to choose whatever stance they want to take on a selection of given material.

Aimee Craft is the director of research at the National Centre for Truth and Reconciliation at the University of Manitoba.

She says even though only one of the TRC’s calls to action specifically targets law schools, all 94 recommendations have legal implications and should be tackled and considered as a whole.

Craft says Indigenizing law faculties and living up to the spirit of the TRC final report will require universities to think outside the box.

“By no means is law an easy thing and it’s changing and evolving,” she says. “It’s the same thing for Indigenous law. It may be that we haven’t made as much space for it in the past but, as we’re making that space, there’s a lot to fill. It’s just a question in some cases of being attuned to it and aware of what’s happening.”

The discussion panel was moderated by the University of Saskatchewan’s Native Law Centre of Canada.