Women to walk the length of Saskatchewan River in ceremony 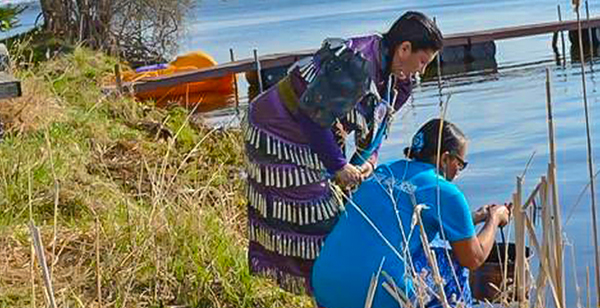 Tasha Beeds and an Ontario walker, Liz Osawamick, collecting water in a copper pail at Scugog River for a 2014 Water Walk. Photo submitted

This summer, a small band of women will walk the length of the North Saskatchewan River, from its headwaters in the Rocky Mountains to Lake Winnipeg, in a two-month ceremony to honour and protect the water.

Tasha Beeds, a Saskatchewan Cree-Metis, will lead the 1,900 kilometer Water Walk, continuing the tradition that was passed to her by Josephine-BA Mandamin (the Ba suffix is an Anishnaabe marker for one who is deceased), an Ojibway from Manitoulin Island and a world renowned water activist, who conducted ceremonial Water Walks around each of the Great Lakes and other bodies of water for 15 years.

Beeds joined her on many of those walks and promised Josephine-Ba, before her passing in 2018, to carry on this women’s ceremony.

“It’s about raising consciousness about the life of the water,” Beeds said.

Last fall, Marjorie Beaucage, an artist and lifelong environmental activist, and Karen Gitlitz, the minister of Saskatoon’s Unitarian Congregation, asked Beeds to lead them on a Water Walk for the Saskatchewan River.

The Unitarians had asked Beaucage to teach them about action for reconciliation and in the course of that, she’d told them about the need to protect the water and about the Water Walkers.

Beaucage had, for years, wanted to join Josephine-Ba, so when Gitlitz said she wanted to do a walk for the Saskatchewan River, Beaucage knew the time was right.

They didn’t balk when Beeds told them about the scale of the commitment. It means walking the entire length of the river, which is likely to take two or three months. Once begun, the water must keep moving forward, never back. Beeds, at least, must walk for the same body of water for four years. She plans to do part of one year’s trek by canoe, from Lake Winnipeg to Hudson’s Bay. In another year, she will walk the length of the South Saskatchewan River.

Beeds is from Saskatchewan but now lives in Ontario, where she did all her previous walks, but had always wanted to return home and walk for the water that her Métis ancestors had traveled upon. 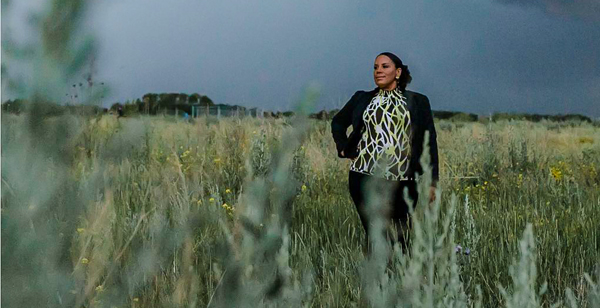 This walk will be more challenging than the previous ones because it starts in the mountains.

“Every single person from Manitoba to Alberta should be looking at those Rockies because we are connected to that watershed. It connects to the Saskatchewan River, which connects to Lake Winnipeg and all of the tributaries in between. So whatever happens at the headwaters is going to impact all of the waterways,” Beeds said.

A Walker carries water from the river in a copper pail and an eagle staff carrier accompanies her. His role is to protect the woman and ensure the road ahead is clear of obstructions.

“There’s a role for everyone. If you’re gender fluid, you’re welcome to come and carry the water staff” or walk between him and the water carrier, she said.

The walkers take turns, relay style, never stopping the forward movement of the water, except to sleep.

The group will walk on roadways that travel approximately along the river, starting at Saskatchewan Crossing between Banff and Jasper, making their way through Edmonton, North Battleford, Prince Albert and then to Lake Winnipeg.

The core group will also include Michaela Merasty, Kahtéraks Quinney-Goodleaf and Linda Manitowabi, the latter two are from Ontario.

Supporters are welcome to join the walkers along the way, though they will have to follow strict COVID protocols.

The core group is still lacking a man to carry the eagle feather staff. Beeds has faith the right person will join them. If not, she will carry the staff herself.

The group has already attracted some sponsorship but they will also need to cover Elder honoraria, food and supplies. Those who wish to donate are invited to e-transfer livingwaterwalk@gmail.com or donate through the Saskatoon Unitarians.

The Water Walkers are wishing for a sponsored RV rental or donation so they can minimize use of hotels and interactions with people outside their bubble. If that doesn’t happen, they’ll make do with a three-person camper and tents.