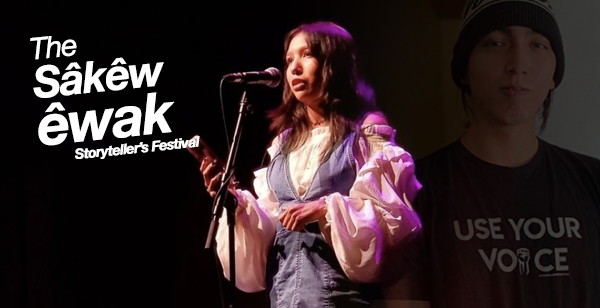 As part of National Indigenous History Month, the Sâkêwêwak Artist Collective hosted a four-day event that included storytellers from a wide range of artistic expressions such as film, poetry, comedy and music.

22-year-old poet Tai Reign said it was an awesome experience to be one of the performers at this year’s festival.

The festival continued its legacy of giving a spotlight to artistic Indigenous endeavours in the Regina community.

The poetry night was hosted by Kevin Wesaquate, a spoken word artist and included performances by ecoaborijanelle, Austin “The Noble Savage” Ahenakew, Tai Reign, Tenille Campbell, and the MC, Kevin Wesaquate, took the stage to share their stories through rhythmic storytelling.

Janelle “ecoaborijanelle” Pewapsconias started the night and shared personal pieces on identity as an Indigenous person and all the complexities that entails in 2022. Through her spoken word, ecoaborijanelle discovers finding peace with an evolved understanding of what it means to be an Indigenous person, intergenerational trauma and all. One of her pieces also celebrated the beauty of life in the Indigenous community, as opposed to life in the city.

ecoaborijanelle currently teaches art on Little Pine First Nation in Treaty 6 Territory and takes pride in continuing the spoken word legacy of the nehîyaw people. While she loves to share about joys of living on rez, she also points out that she does not represent all Indigenous experiences.

Following ecoaborijanelle was Austin “The Noble Savage” Ahenakew. The passion in Austin’s performance helped to further emphasise the vivid pictures he painted with his powerful words.

His eclectic timing of rhythm and flow sparks a sense of urgency regarding the issues facing the Indigenuous community such as abuse and PTSD in a thoroughly honest way.

Reign calls Ahenakew her poetry brother because they came up in the poetry community at the same time.

Reign also performed a number of pieces about the struggles facing the Indigenuous people during their set. Some of their pieces included a land acknowledgement piece, “Ugly,” “Two For One,” and “No Good.”

Their poetry all started with a high school English assignment.

“Once I found out that poetry was a good way to express myself, it became my outlet, my point of view, and my mental health,” they said.

Reign has come a long way from those school days as they are now the Spoken Word coordinator for Regina Word Up, which is run by the Creative City Centre. They look forward to planning Spoken Word events and workshops in the future.

Closing off the poetry night was Tenille Campbell.

The Dene/Métis author and photographer is from English River First Nation and is unrelenting in her efforts to reclaim the narrative of Indigenuous love through her work.

Reign says Campbell’s set was a standout for her during the poetry night because of how joyous it was.

“I thought that her pieces were so amazing because my poetry and the poetry I often hear is about the negative things that we experience so it was wonderful to hear about somebody’s positive experiences about Indigenous love and living while brown.”