Keeseekoose has released the results of its search 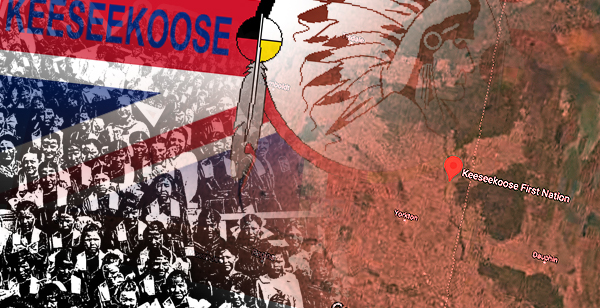 The number of unmarked graves discovered on the grounds of former Indian Residential Schools has increased by 54.

The Keeseekoose First Nation announced it has located at least 12 at St. Phillips Residential School and 42 at the Fort Pelly site.

Chief Lee Kitchemonia said the discovery has caused a lot of hurt.

The locations of the unmarked graves were in common areas where the community members drive and walk by everyday, which he said was very sad because it demonstrates how these children were just disregarded like they didn’t matter.

He said it’s difficult to not be bitter.

“Who’s going to be held accountable?” said Kitchemonia in his opening remarks.

The next step is to identify the children in the unmarked graves.

“They could be our uncles, our aunts, or our grandparents,” said Kitchemonia.

Four members of the Keeseekoose Knowledge Keepers stood up at the podium and addressed the audience only in their traditional language.

Lt-Gov Russ Mirasty who is not only the Queen’s representative but who is also a Residential School Survivor also chose to speak only in Cree.

Last month, Miller and Stephanie Scott, executive director of the National Centre for Truth and Reconciliation (NCTR) signed a Memorandum of Agreement that outlines how and when Canada will share historical documents related to Residential Schools.

It was developed by both parties to ensure efficient and secure transmission of documents while protecting and respecting the privacy of Survivors. The timing will be set by the National Centre for Truth and Reconciliation and will begin with school narratives. The Memorandum also outlines the next steps to acquire records of Residential School history.

Chief George Cote also announced plans to search the Crow Standing residential school that was once situated east of the Town of Kamsack on land that once belonged to Cote First Nation.

Ted Quewezance, a Survivor and project manager for Keeseekoose, said the language and culture is a gift from the creator which is why he is grateful for the Knowledge Keepers who have been instrumental in the search.

“The locations we were scanning were identified by Survivors and Knowledge Keepers from oral history,” said Quewazance. “The ground-penetrating radar simply validated our oral history. Keeseekoose families and Survivors want closure as reclamation re-traumatizes our families.”

He said it is now more important than ever for survivors to tell their stories.

Cameron reiterated the need for the federal government to build healing centres at the sites of the former residential schools.