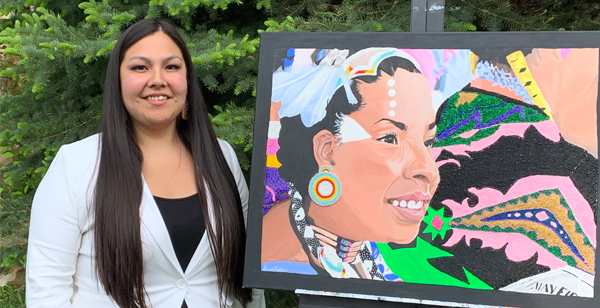 Danielle Kehler has made history as the first First Nations person to be selected as a participant in the 2041 ClimateForce Antarctic Expedition. Photo submitted by Danielle Kehler

A Saskatchewan woman has made history as the first First Nations person to be selected as a participant in the 2041 ClimateForce Antarctic Expedition.

Danielle Kehler was selected to be part of a 100-person team journeying to Antarctica in March 2022. This international team is made up of citizens of every continent with the common goal of studying global warming.

Kehler was recruited to participate in the 12-day educational voyage after being interviewed by a newspaper reporter about Indigenous people and the impact of climate change, which the recruiters read.

Kehler believes the ecologicalknowledge she got from her kokum growing up will be helpful not only on this expedition but in the long run as people figure out how to solve the climate crisis.

“Indigenous people all over the world hold vast amounts of traditional ecological knowledge that is critical to the preservation of Mother Earth,” said Kehler. “It is essential that we have Indigenous representation in these spaces while contributing to the creation of sustainable solutions in regards to biodiversity, water, and the land.”

Although she is excited about participating in the 2041 ClimateForce Antarctic Expedition, it is not lost on her that she will be the first Indigenous woman to do this.

“I want to show the need for Indigenous representation in these spaces because our traditional ways of living on the land are essential for the development of sustainable solutions around the world,” said Kehler. “I want to dismantle colonial structures and break barriers for our people to enter these spaces and be seen, heard, and included.”

During this endeavour from March 16 to 29, Kehler will be doing things such as studying and observing glaciers, icebergs, wildlife; participating in lessons and workshops led by renowned experts in their fields, but she’s looking forward to the shore landings at key sites along the Antarctic Peninsula the most.

“It’s going to be cold but I was born and raised in Saskatchewan,” said Kehler.

Although Kehler is looking forward to the new connections she will make during this expedition, for her, this work is not about the here and now but for future generations.

“The work I will be doing and putting in place is not for me but the next seven generations and beyond,” said Kehler. “So that we can not only survive but thrive and have Mother Earth thrive with us.”

Kehler has raised $16,000 of the $26,000 needed and is currently still looking for support. All money goes towards things such as travel costs including Expedition fee, airfare, clothing, equipment, and incentives.

Anyone wishing to support or find out more about the expedition can contact Kehler directly at daniikehler@gmail.com.