Walking for all missing, murdered 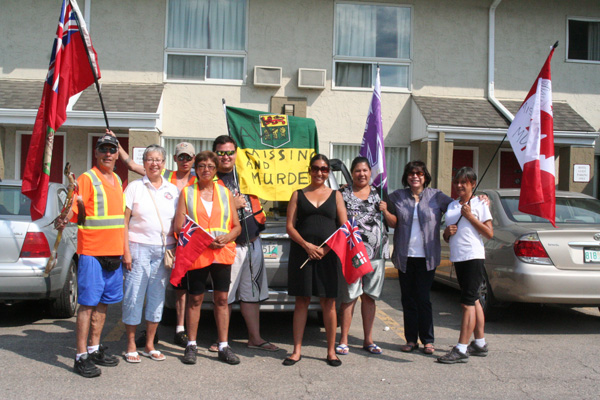 Brenda Osborne from Norway House left her home community on July 18th for the seventh summer in a row, headed for Winnipeg to raise awareness and support for all missing and murdered and their families left behind. She has covered over 1600 km as of August 9th, on the way to Vancouver and then up the coast to the Highway of Tears with the walkers who have joined.

Brenda lost her cousin Helen-Betty Osborne 44 years ago this November to violence, misogyny, racism, and indifference: four non-Aboriginal men from The Pas kidnapped, assaulted and murdered her, and then remained at large for sixteen years with only one of the four eventually receiving minimal charges and sentencing.

Since then, Brenda has lost other relatives, including 16 year-old cousin Felicia Solomon and, seven years ago, her own 21 year-old daughter Claudette, a mother of four living in Winnipeg who was last heard from in July of 2008, phoning a sister in fear. Brenda found out on the news: police didn’t even contact her.

She has been not only trying to find leads herself, but walking to raise awareness every year since, in part inspired by Tears 4 Justice national walker and advocate Gladys Radek, aunt to Tamara Lynn Chipman: surviving as a bereaved family member without answers, trying to make sure nobody else has to go through this.

And that those who are going through it, know they are not alone, such as fellow trekker Myrna Abraham whose sister’s DNA was found on Pickton’s farm.

“People are supportive, they’ll honk or wave or stop and talk with us,” Brenda noted. “There is a lot of growing awareness.”

But the pain, whether in blistered feet or broken hearts, is never far away.

Donations for gas, lodging, food, camping, and supplies can be made via Brenda’s Royal Bank chequing account number #05879-003-5004874. Gift and gas cards, good socks which must be changed frequently, and good hiking shoes are all welcome, for Vince from Red Lake Ontario (size 9), Gil from Winnipeg (size 10), Ray from Onion Lake (size 12), Mary Mayt from Lake Manitoba (size 8.5), Althea Guiboche from Winnipeg (size 8), Myrna Abraham from Sagkeeng First Nation along with Brenda (both size 9).

In Saskatoon, Iskwewuk E-wichiwitochik (Women Walking Together) hosted a Monday evening community potluck and media event, providing support. Walkers set off Tuesday for North Battleford on the Yellowhead, and then onwards to Edmonton.

Updates can be found on Facebook at “Walk for ALL Missing & Murdered 2015”.