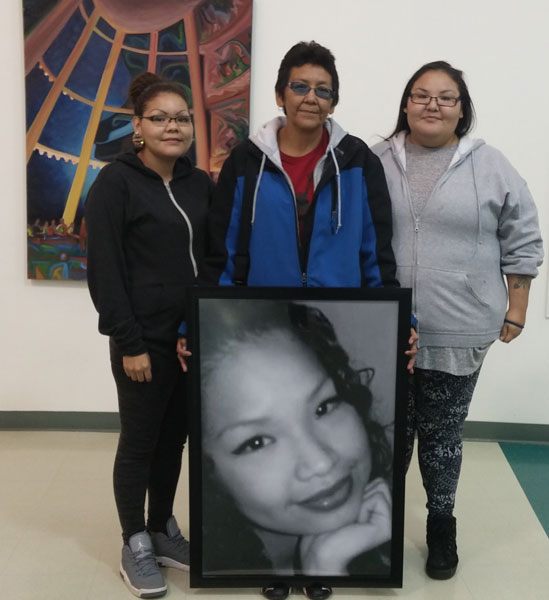 The mother and sisters of the late Kelly Goforth at the recent Sisters in Spirit vigil in Regina.

The mother of a murdered Indigenous women is hoping to create a positive legacy for her daughter.

The late Kelly Goforth was one of many women honoured and remembered at the recent Sisters in Spirit vigils held across Canada earlier this month, including in Regina and Saskatoon.

“It’s about providing a sacred ceremonial space, a safe place for the families and the community members to come together and share and heal and show solidarity,” says Jaqueline Anaquod, lead organizer for the event in Regina.

Goforth’s mother, Maxine, and two of her sisters attended the Regina vigil carrying a photo of her.

Maxine explains the close bond her late daughter had with her five siblings.

“I have three boys, three girls, Kelly was the baby girl, I have five left. Kelly was the foundation of the family, the protector, the technical girl, whatever needed to be done Kelly did it,” she says.

Numerous indigenous and non-indigenous peoples showed up for the men’s and women’s pipe ceremony, the vigil, and the community supper. Volunteers from the Saskatchewan Government and General Employee’s Union (SGEU), and Women’s Commission gave their gracious support.

At the First Nations University of Canada, the atrium was full of supporters for the vigil. Anaquod was very pleased with the turnout.

“If there was three families here, I’d be happy because that means there’s three families that are going to start healing,” says Anaquod, “It all begins with one person, so maybe tonight one person heard something and that’s going to change their life, that can set them on the track to something completely different.”

Goforth’s mother, Maxine, feels she received justice personally because the trial for the man accused and now convicted of killing her daughter is done and she can move forward. Her grandson, Kelly Goforth’s son, was 11 months old when he lost his mom; and he will be 24 if the man responsible receives parole in 20 years.

This event was organized for the treaty 4 territory and for the family members of the victims, whether they are missing or taken.