During one of the busiest times of the year, often accompanied by social and financial pressures, Curtis Peeteetuce, and the cast and crew, behind Luff Actually want to remind you to take time to laugh. 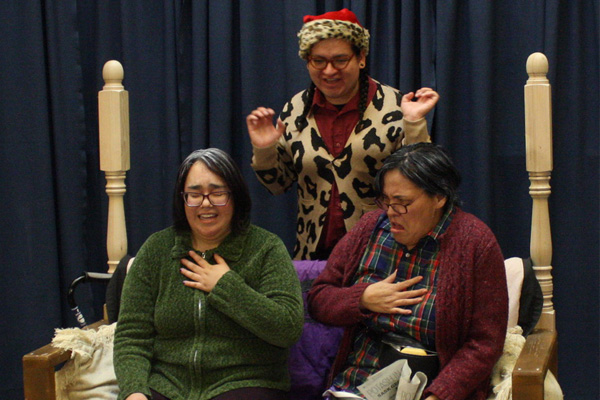 “I would love to remind audiences, especially around this time of year, that humour is good medicine,” said Peeteetuce, the writer and director of Luff Actually. “When there is 400 people in a theatre, all belly-laughing, I think there is a wonderful energy, a community spirit, tied to that.”

Luff Actually is about a trio known at the Kohkoms, who are preparing for a private Christmas party, but the band office on the reserve crashes the festivities.

“I wanted to keep (the three ladies) on reserve and see what kind of shenanigans they can come up with. The idea of a party came up, and the greatest drama you can have for a party are people showing up who do you not want to be there,” said Peeteetuce.

The Christmas play is part of the popular Rez Christmas Series, created in 2001 by Peeteetuce and four other actors, originally as a way to adapt Charles Dicken’s A Christmas Carol to a First Nations community. The series now consists of ten plays, one of which is performed annually during the Christmas season.

Peeteetuce said that Luff Actually is one of the most popular in the series, both for its humour and its heartfelt themes.

“(The play) explores the notions of love, because at Christmas time, I think we get rushed in our notions of love,” he said. “Sometimes those notions can be misguided, and so in this story there’s a very special message about what love means, not only from a Christmas perspective, but from a Cree cultural perspective.”

There is certainly proof of the impact these plays can have. Aaron Marie Nepoose, one of the actors in this year’s performance, was motivated to become an actor after watching a previous performance of a Rez Christmas story.

“The Kohkoms were in Vegas and it was a really funny story that showed so much joy and hope in our communities,” said Nepoose. “It inspired me to become an actor. As soon as I could, I joined the Circle of Voices program and I can’t believe I get to play one of Kohkoms this year.”

Providing audiences with that joy and hope is can be particularly important to Indigenous audiences, said Peeteetuce.

In addition to their theatrical run in Saskatoon, the cast and crew are taking the play to several First Nations around the province which include the Ahtahkakoop Cree Nation, Lac La Ronge Indian Band, and Beardy’s and Okemasis Cree Nation in an effort to uplift as many people as they can.

“It’s a Christmas show that doesn’t inundate you or throw Christmas in your face. It’s a story of humour and it’s very heartwarming.”

Luff Actually plays December 10-15, 2019 at the Broadway Theatre in Saskatoon.