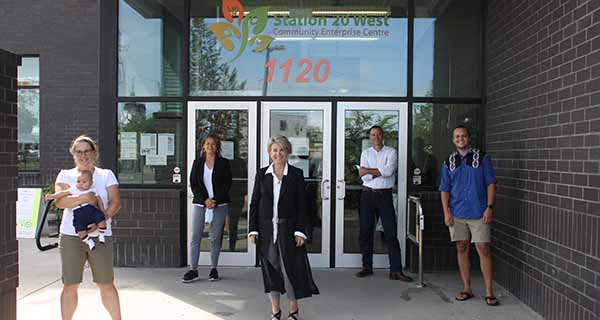 Two new University of Saskatchewan led research centres at Station 20 West, in a core neighbourhood in Saskatoon, are aiming to invigorate Indigenous health research in Saskatchewan and create a more welcoming and accessible environment around academic research.

“The move to Station 20 West means the distance between us and the community is shorter,” said Caroline Tait, interim executive director of the First Nations and Metis Health and Research Centre, and USask Professor of Psychiatry.

“Station 20 West is so important because the university is an environment where our people don't necessarily feel comfortable,” said Tait who is Metis. “We feel really good about being in the community and that our doors are open and people can come in. It shows the University’s commitment to community engagement.”

The two research centres are part of nine new centres across Canada funded by the Canadian Institute of Health Research through the Institute of Indigenous People’s Health. The two at Station 20 West consist of a Metis Centre, called 'aen mamawii kiiayaahk', which means 'healing together', and a First Nations Centre called 'nātawihowin', meaing 'the art of self-healing'.

“Health data has never been more valuable than it is now. We have the ability as Indigenous people to collect data and analyze it so we’re able to ask questions from a cultural perspective,” said Tait.

“We are still, in this province, experiencing significant health disparities for First Nations and Metis people. Particularly health disparities in inner cities where the majority of our people live (...) and COVID-19 is furthering those inequities.”

Tait said one of their goals is to increase the amount of Indigenous health research dollars coming into the province by anywhere from 50 to 100 percent in the next five years. They are also working with Whitecap Dakota Chief Darcy Bear and Usask in potentially creating an International Indigenous Research Centre at Whitecap Dakota First Nation sometime in the future.

“This would be a research centre that would bring the Indigenous world to Saskatchewan. Indigenous people across the globe working in health-related research could work together on a campus of Indigenous researchers and students and partner at a very high level,” said Tait.

One such researcher already working in Saskatoon is Dr. Simon Lambert, executive director of the national coordinating centre for the nine research centres across Canada. Lambert, an Indigenous Maori from New Zealand, is looking at the impact the pandemic will be having on our vulnerable communities.

“The thing I’m most scared about is the coming economic crunch. I think it’s already here. I think there are more homeless people here now,” said Lambert.

Some of the complex questions Lambert will be focusing on throughout his research include: how we respond to a disaster while having to stay two metres away, how can we make an urban environment more supportive, what response do we have to those unemployed in traditional territories who wish to remain in their home, and how do we start to rethink how we live on the land and planet?

Lambert said that when disaster such as COVID-19 hit vulnerable communities, there's a danger for that disaster to serve as a distraction or false conclusion to the real issues.

“When a disaster like this hit, everyone assumes that everyone is being impacted by the disaster. But when you do research in the community and start talking to people, they might tell you what's really impacting them is actually something else.”