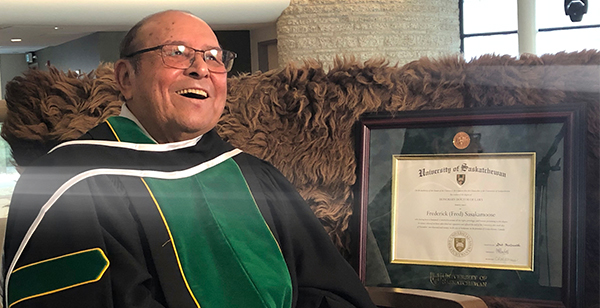 In an interview, Dr. Sasakamoose was clearly moved by receiving the university’s highest award and called it “the highest honour of my life,” and “the finishing touch of my life.”

He laughed when asked what he’ll do with his diploma.

"I don't know what the hell to do with it, but it looks great on my wall," he said. It is now displayed beside his Order of Canada in his living room at Ahtahkakoop Cree Nation.

"I've had many accomplishments in my life time and many hardships, but to be seen and recognized by the university and the rest of Canada, is really a great honour. I feel proud of everything I’ve been though," he said.

“I never had no education, it was against the policy of Indian Affairs to educate the Indian people in 1948, ’49… A lot of that was, ‘don’t use your language, your culture.’

Everything was taken away; the way you worship God, it was taken away from you. You go in there, the Catholic Church, that was the only way, that’s what they said.

“I practice my own life right now, sweetgrass and the smudge, I still do that. It made a better man out of me.”

Frederick George Sasakamoose, was born in 1933, at Whitefish Lake, which is now called Big River First Nation. He moved to Ahtahkakoop after marrying Loretta Isbister.

When he was small boy, his grandfather taught him how to skate wearing double runner skates tied over moccasins. His hockey stick was a willow branch shaped for play and a frozen horse "apple" was his puck.

He was six when he and his older brother, Frank, were taken to St. Michael’s Indian Residential School at Duck Lake. Nuns at the school cut off their braids and banned speaking Cree. Sasakamoose suffered emotional, physical and sexual abuse at the school, but two things helped him – thoughts of home and skating.

The school priest, Father Georges Roussel, worked with Sasakamoose to develop his hockey skills. He even learned to shoot with his left-hand, giving him the benefit of being ambidextrous.

He recalled being at home in the summer of 1949, when he received a life-changing visit.

"George Vogan, the manager for Moose Jaw (Canucks of the Western Canada Junior Hockey League) took three days to find me. We had no phone and no way to be contacted. We seen a vehicle three miles out, coming closer and closer to our place, so my brother and I hid, until I recognized George (Roussel),” he said.

"After watching them talk to my parents, my mom asked me to come towards her. I thought she meant my brother Frank, to be honest, I was really hoping she meant my brother… but (she) told me I had to leave again, this time 600 miles south to play hockey."

Sasakamoose played for five years with Moose Jaw, which was a farm team for the Chicago Black Hawks. After a Moose Jaw game in early 1954, Vogan read a telegram to the team that called Sasakamoose up to the National Hockey League.

"That night, I was on the train to Toronto," he recalled.

Sasakamoose says he loved the team logo on his Black Hawks jersey and was proud to be an Indian wearing a jersey with an Indian on it.

While many people feel it’s disrespectful or insulting for sports teams to use Indigenous names and likenesses, Sasakamoose takes it as a compliment, as in the case of the Washington Red Skins football team, which has bowed to pressure to change its name.

“I don’t know why they’re complaining… What’s the matter with that? There’s nothing wrong with being a redskin,” Sasakamoose said.

“Be proud that’s who you are, be proud that the team is called the Red Skins.”

After hockey, Sasakamoose went on to be a role model and sports booster. He served as chief and as a long-time counselor at Ahtahkakoop.