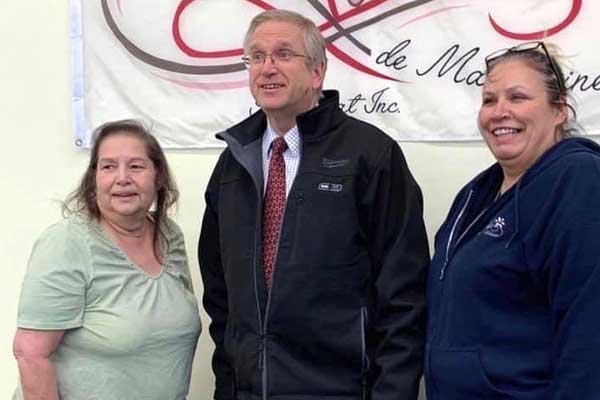 Metis women have stepped forward to deliver food in all the 12 regions of the Metis Nation-Saskatchewan (MN-S) during the pandemic.

Les Filles de Madeleine Secretariat, (Les Filles) received $135,000 from MN-S to purchase the food and about 100 women volunteers are delivering hampers, said Tammy Mah, president of group which has a seat on the Provincial Metis Council.

“We have participated 100 per cent with the MN-S,” Mah said. “They have really helped our citizens across Saskatchewan. The MN-S gave us our funding and the volunteering came from the women. We have had a lot of people who have wanted to volunteer. We were able to get money to all these regions to do food hampers. Your food bill can jump up.”

Volunteers are delivering the hampers so recipients can stay safely at home. The first hampers were given mainly to seniors and those who were recently laid off.

“We focused on our Métis citizens who needed it,” she said. “Each region really reached out to help some of the seniors. They really didn’t get much funding during this COVID-19 crisis. We tried to get hampers to the unemployed right away. Everybody was grateful for what they got. I didn’t get any negative feedback.”

The chapter in Prince Albert received a deal from Wes Erlendson, the owner of the Safeway in the city.

“We approached Safeway because we know that they will work with our Aboriginal community very well,” Mah said. “Wes really helped us.”

“We put potatoes, rice, macaroni, apple juice, cookies, meat, tomatoes and eggs in our hampers,” she added. “We put in everything but the kitchen sink. You name it. We keep everything refrigerated that has to be until it’s going out. Those hampers were really nice. This is needed and we’re willing to do it.”

Mah estimates about 1000 hampers have been delivered across the province as of the end of May.

“It’s hard to find cleaning supplies in Prince Albert,” Mah said. “We are taking names because there are people that still need this. We’re not shutting the door on anybody. We still have a bit of money left over. We are doing the best we can. That’s the only thing we can do until this crisis is over.”