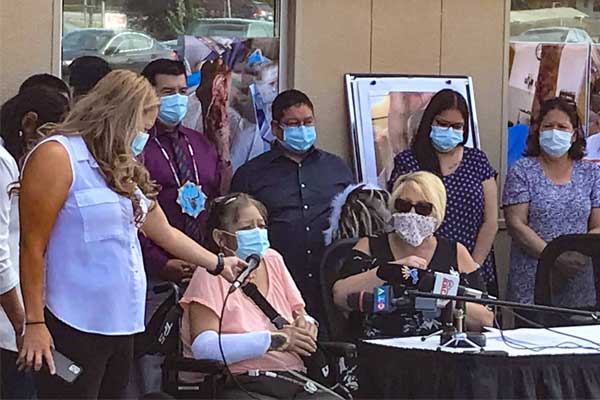 Janette Sanderson suffered burns to her arm after treatment for a broken ankle at Victoria Hospital in Prince Albert on June 30th, 2020. Photos by Ray Mandes Jr.

A 53-year-old woman from James Smith Cree Nation was left with severe disfiguring burns on her body after seeking medical attention at a Prince Albert hospital. Janette Sanderson had taken herself to see a doctor at Victoria Hospital in Prince Albert on June 30th, 2020 for a broken ankle and was injected with an unknown substance while she was in the emergency room.

“The nurse told me it was potassium. She injected my arm and I told her it was burning and cried for her to stop. She kept going and ignored my pain,” stated Sanderson in a media release.  “They transported me to Saskatoon and after two weeks they sent me home. I was told when they discharged me (on July 15) from RUH that my arm would heal itself. The home care nurses checked on it and it got worse. I went to another doctor in Melfort and they told me that it was a potassium burn and not a calcium burn, like suggested by the doctors in Prince Albert. We still don’t know what it was because the nurse didn’t keep the record.”

Sanderson broke her silence at a press conference held in Saskatoon to share her story. She was accompanied by family, supporters and members of the Federation of Sovereign Indigenous Nations (FSIN) executive.

“We will support this family, legally, politically and spiritually until this matter is resolved,” stated FSIN Chief Bobby Cameron. “Our First Nations elders should never be scared to go to the hospital. They should be cared for and respected and we will do all that we can to make sure no other elders face this same treatment while in hospital.”

FSIN Vice-Chief David Pratt added that First Nations people have been subjected to poor treatment by health care workers and doctors for years and that change is needed.

“This is why we need a health ombudsman to watch out for our First Nations people,” he stated. “The terrible stories of mistreatment while in the health care system by First Nations people have come forward in the past and it’s still continuing today. We need change and we need it now.”

The James Smith Cree Nation Chief Wally Burns was also in attendance at the press conference to support and advocate for one of his band members.

“We [cannot] stand idly by while our First Nations elders are being treated poorly while trying to get medical care,” stated Chief Burns. “Our people go to the hospital expecting proper care and to hear that Janette Sanderson was treated this way is inexcusable. Our elderly are the most vulnerable members of our communities and we have to stand up for them and protect them.”

“The SHA has already been in contact with the patient and family. An investigation about the quality of care concerns is ongoing,” McLetchied said in an email statement. “We are not able to provide any further details about a specific patient’s personal health information. As in any situation where there may have been concerns with the quality of care provided, the SHA starts a review process to determine what may have occurred.”