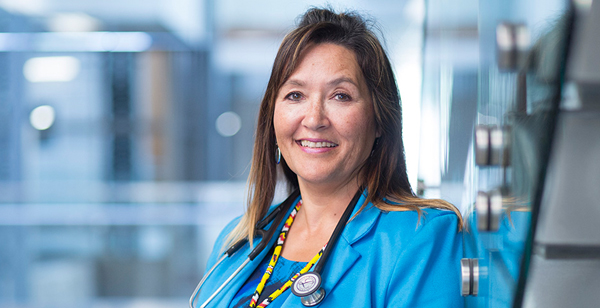 Dr. Veronica McKinney says culture can be a powerful influence on your health. She notes the stronger culture is in a community, the healthier the people are. Photo supplied

McKinney remembers a patient who was so accustomed to being given short shrift by doctors that he wept when she placed a sympathetic hand on his shoulder.

She examined the man, who was in his 40s, and discovered he had been born with a condition, that caused pain and other problems, but no doctor had ever examined him carefully enough to diagnose the problem.

“I always thought I was too dirty to be touched because nobody has ever examined me or touched me,” he told her.

“You’d be shocked how many people have never been examined, ever. They’ve been labeled as drug seekers, they may or may not have received medicine,” said McKinney, who is the Director of Northern Medical Services with the College of Medicine at the University of Saskatchewan

She and Asiniwasis are often advocates.

When the funding agency Non-Insured Health Benefits (NIHB) de-listed a prescription-grade moisturizer needed to help a common skin treatment work, Asiniwasis argued with them and convinced them to reinstate its funding.

Asiniwasis, the first Indigenous dermatologist in Canada, says there is a great need for skin specialists who understand the specific needs of Indigenous people, especially those who live in remote communities.

Overcrowded housing, inflated prices for healthy food and basic skin care products, lack of local medical laboratories and even, sometimes lack of clean water for washing have led to a skin health crisis in some First Nations, she said.

“The skin is a manifestation of both internal and external health, and Indigenous populations face unique challenges and barriers compared to the general Canadian population,” she said.

Asiniwasis has a private practice and holds regular outreach clinics in northern and southern Saskatchewan.

In March she hosted the first national Indigenous Skin Summit to improve patient care and treatment in a culturally holistic context. She released Calls to Action for the medical community that includes requiring extra dermatology training and cultural competency for people who will work in remote communities.

McKinney says culture can be a powerful influence.

“A lot of our traditional medicines can be teas and things like that, but a lot of it is around ceremony and having access to learning and understanding your culture. It’s the actual traditional ways of doing things. Maybe it’s participating in a sweat or a fast.

Many studies have confirmed it can help mental health “substantially, and way more than the medications can,” McKinney said.

A study done in British Columbia in the 1980s examined why some First Nations communities suffered higher suicide rates than others and found that the stronger the culture was in the community, the healthier the people were, she said.

“We see that and so many of our community people know that,” McKinney said. “I use the medicine wheel to consider what are the challenges in all of these areas and what are the strengths and how can we build upon those strengths,” she said.

Plain talk is important too.

“Breaking down that power differential is really critical. I see that as part of my role. And helping people to be gentle with themselves in terms of the trauma that they’ve experienced and helping them recognize that they’re still here and (they’ve) been resilient… Sometimes it’s just listening to people.

“I hope I can help people feel a little more empowered in their health and their health care, then I feel like I’ve done something. If I can help somebody crack a smile, I’m happy and it makes me feel good.”