FSIN and mother of man beaten by police in video call for charges, independent review body 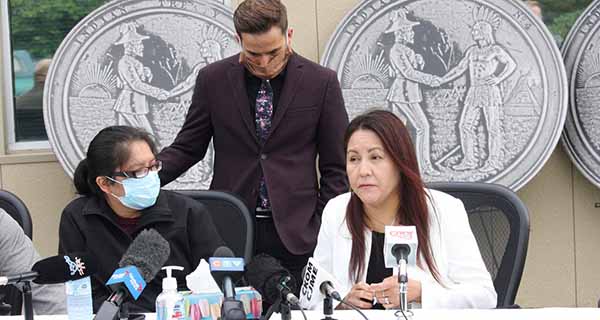 Sherri Penner, mother of Evan Penner, who was filmed July 4 being struck repeatedly by Saskatoon Police, spoke publicly on July 9 about the painful experience she wants no other mother to endure.

“I couldn't even finish watching the video,” Penner said at a news conference at the Federation of Sovereign Indigenous Nations (FSIN) on Thursday.

“For a mother, it's so hard to see something like that happen to your child. I wouldn't want that to happen to anyone else's child,” she said.

Penner, who travelled from her Manitoba home to Saskatoon after her son's arrest, was visibly upset during the new conference and spoke few words. Lawyers representing Penner said the family is traumatized by the incident.

“What happened to Evan Penner is intolerable. There is no reason for the amount of force that was used by that officer in the video. Police brutality has to stop. Indigenous people, black people, cannot be subjected to that kind of violence any longer,” said lawyer Eleanore Sunchild.

“The family will take all legal action necessary to pursue justice for Evan,” she said.

Evan Penner was arrested on the 500 block of 11 Street West, after a non-emergency call from a tenant, complaining she felt unsafe as a man was using a garden hose in front of her building to bathe. In the video, a police officer can be seen punching a man identified as Penner multiple times, before several more officers join in apprehending the man, who was also pepper sprayed and shocked with a Taser or conducted energy device during the arrest.

Penner has been charged with multiple offences, including attempting to disarm a peace officer, assaulting a police officer, mischief and possession of a controlled substance.

FSIN Chief Bobby Cameron called for restorative justice and for action to be taken against the arresting officer.

“The task at hand is seeing this individual officer, and other officers who beat Evan Penner, that they be terminated as the family has requested, and the law will take it's course and do what's right for the family,” said Cameron.

“Here in the city of Saskatoon, we are dealing with poverty and addiction of all sorts. And to continue to punish those that are going through the system... is not the right path moving forward.”

Sunchild said they will push for criminal charges against all the officers involved in the incident.

The FSIN is also calling for an independent civilian-led police authority to investigate incidents where people have been injured or killed by police. They are also calling for police agencies to review their use-of-force policies, and for all police to be required to wear body cameras.

“Our citizens continue to have mistrust and apprehensions toward the average frontline police officer on the street. That fear and mistrust is real, given the fact that the media has covered many stories over the years where our people experience unnecessary force and violence at the hands of police,” said FSIN Vice-Chief Dutch Lerat.

Penner was released from custody Monday and is now healing with his family, according to FSIN.