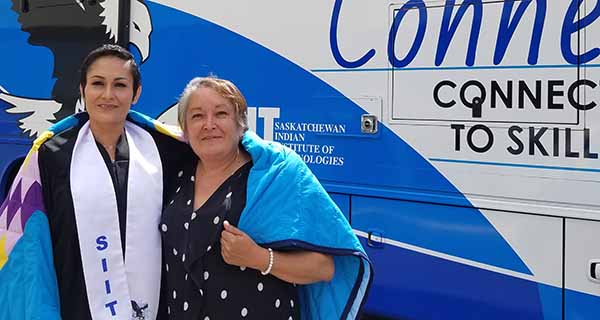 Lynda Ahenakew, one of four recipients of the SIIT President’s Leadership Awards, with her mother Sandra. Both survived breast cancer at an early age.

“It’s an amazing accomplishment,” said Ahenakew. “I had stage two breast cancer. I was diagnosed after the completion of year one and then I went through chemo and radiation during year two, and a double mastectomy and both my ovaries removed. I managed to not only get through that but graduated with great distinction and 95 per cent attendance as well.”

Ahenakew says she has overcome addictions, gone through traumas in childhood, and fled domestic violence just prior to entering the program.

“I have worked for my First Nation as a health and wellness worker and understood my passion was with my people and helping in any way I could, and so when I read up on the program I fell in love with it: the courses, Indigenous models of healing, therapeutic interventions, Indigenous spirituality throughout. That’s where I wanted to help with people struggling through intergenerational trauma, something that plagues our communities. If I can help just one person in any way then I’ve done my part, I think.”

Ahenakew moved from Ahtahkakoop to Regina, where her mother and sisters already were, to do the program, along with her 17-year-old son, 15-year-old daughter, 14-year-old son, and 6-year-old daughter. When one of her professors phoned to let her know she had nominated her, she felt honoured just to be thought of, but when she received the award she was in tears.

Regina Treaty Services hired her for a summer position for her practicum, knowing her diagnosis and the fact she was undergoing chemo every Tuesday would mean she sometimes had a three-day work week because she couldn’t get out of bed after chemo. Ahenakew began year two with four rounds of chemo remaining and says the classroom setting of 24 students helped her through it all.

“We had talking circles every Friday to finish off our week. I miss that family we had together. They helped me through a lot of that. You have to stay strong as a mother and provider and role model, you just need to stay positive and focus, so my SIIT family was really that for me, they saw me sick and bald but their love and encouragement and support from them and my mother and sisters really helped.”

Her first surgery was in November, just as her second practicum was to start, but she was able to focus on recovery from surgery instead because she had already accumulated enough hours to cover the six weeks by volunteering at the White Pony Lodge street patrol, helping facilitate Crystal Meth Anonymous groups and working as a sponsor for two years.

“I’m so blessed to be supported with, not only this journey through cancer, but education. I really believe in this diploma and tailoring it to meet our community needs. There’s no shortage of opportunities and I can work in youth care, in addictions, corrections, family support, it allows you to use the diploma for a variety of things working with our people that are out there that need it, men and women and children,” noted Ahenakew. “I’ve heard it said a lot “ahkameyimok” — perseverance and never giving up and to not be afraid to ask for help, that there’s so many people and organizations out there that want to see you succeed in whatever you’re doing so just ask, reach out.”