A Memorandum of Understanding (MOU) in response to the Truth and Reconciliation Commission’s health-related Calls to Action was signed in La Ronge late last week.

Witnesses, along with representatives of the health partners, pose for a photo following the signing of the Memorandum of Understanding. Left to right: Elders Sally Roberts and John Paul McKenzie of Grandmother’s Bay, Ron Woytowich, Chair of the Mamawetan Churchill River Regional Health Authority, Lac La Ronge Indian Band Chief Tammy Cook-Searson and Dr. Preston Smith, Dean of the College of Medicine, University of Saskatchewan.

In addition to Cook-Searson signing on behalf of the LLRIB, other signatories were Ron Woytowich, Chair of the Mamawetan Churchill River Regional Health Authority on behalf of the health region, and Dr. Preston Smith, Dean of the College of Medicine at the University of Saskatchewan, on behalf of Northern Medical Services.

Written in English and Cree (both Syllabics and Roman orthography), the MOU reads:

“Intergenerational impacts of Indian Residential Schools have affected the health of Lac La Ronge Indian Band members and communities.  In the Spirit of Truth and Reconciliation, the parties commit to working together to improve health services for the members and communities of the Lac La Ronge Indian Band and all people of northern Saskatchewan.”

“We were already working together,” said Cook-Searson, emphasizing the desire “to build on that working relationship and making it stronger.”

Woytowich brought greetings from the provincial Minister of Health, the Honourable Dustin Duncan, who acknowledged the harm that has resulted from past policies.

“Our government shares your desire to provide culturally-appropriate, accessible healthcare and services for First Nations residents,” said Duncan in his message.  “We will continue to take steps to address disparities in health outcomes and build a health workforce that reflects our province’s population.” 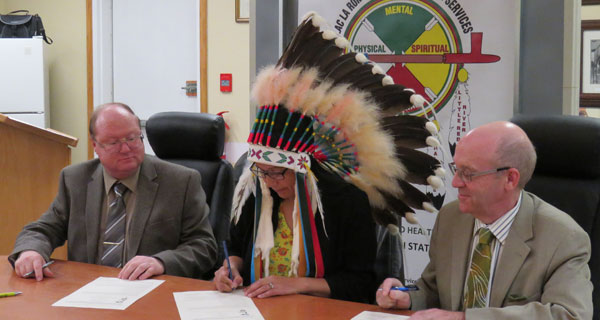 Signing a Memorandum of Understanding in response to the Truth and Reconciliation Commission’s health-related Calls to Action are (l. to r.) Ron Woytowich, Chair of the Mamawetan Churchill River Regional Health Authority, Lac La Ronge Indian Band Chief Tammy Cook-Searson and Dr. Preston Smith, Dean of the College of Medicine, University of Saskatchewan.

Northern Medical Services, which is part of the College of Medicine, is the main physician employer within northern Saskatchewan. Smith noted that the College has taken the initiative of Aboriginal teaching within the medical curriculum to support culturally-safe care.

“We also offer a two-week health elective in clinical settings where Western and Indigenous healing are blended, and students learn from Elders, healers, and women’s helpers, as well as physicians,” said Smith.

The MOU, the first in Saskatchewan in response to the Calls for Action, was proposed by the local Health Services Integration Fund committee. Coordinator Cathy Wheaton said one of the objectives was to create more understanding and recognition of the health impacts of the residential school experience, particularly on emotional and mental well-being.

Elder Albert Ross attended the school that once stood on the site of the current Kiskinwuhumatowin Urban Reserve in La Ronge, and spoke at the signing ceremony.

“A lot of times we’ll feel sad about what happened to us, but let’s forget it,” said Ross. “That’s the only way we can be healed – if we work together, and try to forget the past.”

As part of the journey to healing, Cook-Searson believes that, after years of denial, the time is right for action.

“It was one of those things you just didn’t talk about, and I think we’re at a place now where we can start to open up and be more understanding of each other, and start forgiving each other.”