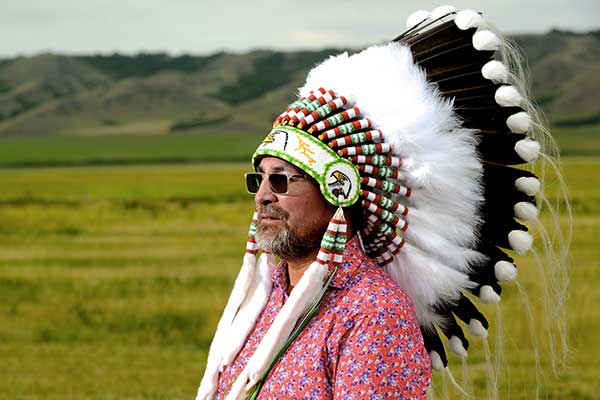 Piapot First Nation recently celebrated the inauguration of its new Chief and Council, in a vote conducted for the first time under the First Nations Election Act.

On July 23, Chief Mark Fox and his newly elected council were surrounded by friends, family, community members and politicians as they were sworn in to their roles under the Piapot Powwow arbour, originally the grounds of the newly minted chief’s original family land.

This year’s election marks the first time Piapot conducted votes under the First Nations Elections Act, created in 2014, as opposed to the Indian Act. Piapot is among 70 communities across Canada using it. Bands can choose which act to use in running their elections.

“Elected members will now serve a four-year term as opposed to the previous two-year term. The new change allows for more consistency in leadership and allows for more longer-term planning,” Chief Fox said in a media release.

Chief Fox says he plans to continue working with the youth and to put more emphasis on economic development, calling them vital to the nation’s success.

“It’s important to move forward with our economic development. We want to get more infrastructure on our First Nation and work toward our youth facilities,” he stated.

Taking care of Piapot’s youth is of particular importance to him and the council members.

“Our youth centre here is going to be open in August. We want that with all types of after-hours programs; counselling, therapists (and) Elders to assist our youth,” he said.

Of the eight councillors elected, six are returning and two are new. Returning councillors are Jeremy Fourhorns, who served as chief prior to Fox, Ira Lavallee, Harold Kaiswatum, Marilyn Kaiswatum, George Toto and Jason Wesaquate. Crystal Crowe and Chase Sayer are new councillors.