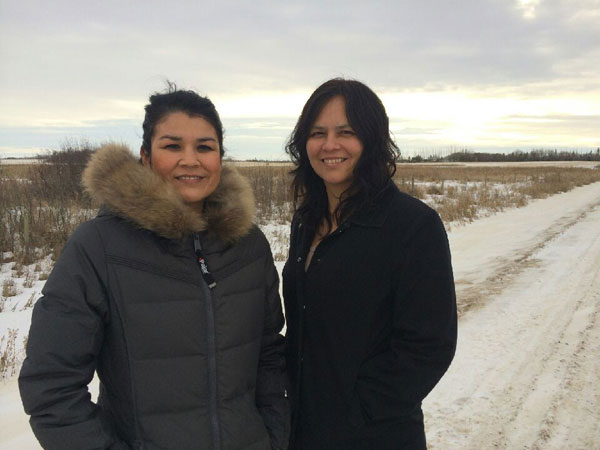 Glenda Abbott(left) and Melody Wood are working to get out the Indigenous vote for the impending federal election.

Two Saskatoon women are doing their part to try and encourage as many Aboriginal people as possible to vote in the 2015 federal election.

The two say they have been spurred into action by legislative changes brought in by the Harper government which a number of critics believe will make it harder for Indigenous people to participate in the next federal election.

Amongst the changes are stricter requirements on voters to prove their address through proper documentation at polling stations such as a driver’s licence.

Gone is the practice of vouching where one person could vouch for another’s location in order for them to vote.

Vouching was a common practice on First Nations reserves where a number of residents often don’t have formal street addresses.

Abbott says the new changes have the potential to negatively impact a number of Aboriginal voters.

“If you look at low income populations in general, getting an ID and filling out forms and having $25 for your birth certificate and $10 for your SGI card and all of these things – jumping through all of these hoops in your everyday life – it can be overwhelming,” she says.

Indigenous Vote 2015 is using a social media campaign and organizing meetings across the province to inform Aboriginal people the identification requirements they will need to meet in order to participate in the federal election.

Wood says the situation they want to avoid is Aboriginal voters going to the polls fully expecting to vote and being turned away because they lack the proper identification requirements.

She adds aside from informing Indigenous voters about the changes, they also want to encourage Aboriginal people to vote strategically for the candidate and party they feel best represents their interests.

“We just want to hopefully encourage people to vote in a block based on the best candidate that they feel, or we feel, will best represent our issues per electoral district,” she says.

Abbott says this is why they feel Indigenous Vote is an issues based rather than a partisan organization.

“A true non-partisan would be getting people informed on all of the parties whether it is Conservative, Green, Liberal or NDP,” she says. “We really want people to know – even right now you can say the Conservatives – but do people really know what their policies are?”

Although vouching has been done away with, voters living on reserve can use a letter from their First Nation confirming their location in order to vote.

Wood and Abbott were in Regina on Tuesday night for an organizing meeting.