John L.: For First Nations people in Saskatchewan, October is silly season. First up is the federal election, to be followed by the Federation of Saskatchewan Indian Nations. Here to comment is Eagle Feather News’ senior political correspondent, the Astonishing Dirk Dashing.

Dirk: John, I have no clue where to start. It’s like my brain thingy is having multiple organisms there’s so much material to fondle and ogle.

John L.: Well, let’s make it easy on you Dirk and start with the federal election. What do you make of the parties on First Nation issues? 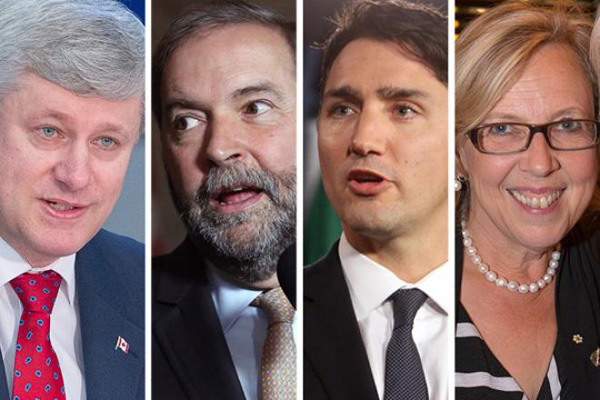 First up, October 19 is the federal election.

Dirk: I can verify that it is possible to reason with Stephen Harper on what’s good for Indian people.

Dirk: Of course, I’ve often reasoned with hamsters and got the same delightful results. I kid of course…hamsters at least pretend to smile, whereas it’s a little alarming when Harper attempts it. He’s almost life-like.

John L.: What about the issues?

Dirk: If there is one thing I’ve learned about this federal election is that everything boils down to hair. Who’s got it? Is it all in the right places? And is it ready? Canadians do not want hair that is not ready.

Dirk: And, from what I gather, voters feel Justin has nice hair, Mulcair may have too much of it, and entire segments of Canadian society are ready to get rid that battle hair thingy that is wearing Harper. “It is,” I quote, “far too Peruvian”, whatever that means.

John L.: I was hoping for some deep political insights, based on the parties positions on Aboriginal issues.

Dirk: Which is exactly what you are getting, John. If there is one thing we Aboriginal-types know, its hair.

Dirk: Hey, did you know famed Indian-lover, Jim Pankiw, has entered the race because he feels voters are ready for the mop on his hypnotic shaped head. His focus? An inquiry into whether in fact Dirk Dashing was indeed breast fed by rainbows.

John L.: Ok, this is getting us nowhere. Let’s switch topics and discuss the upcoming elections for the Federation of Saskatchewan Indian Nations. 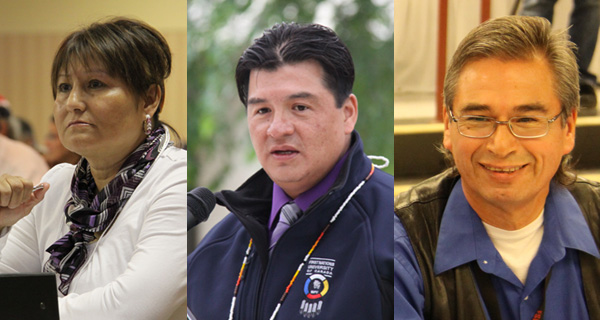 The candidates running for Chief of the FSIN.

Dirk: John, when it comes to Indian politics I find myself thrust – THRUST I TELL YOU! – into the position of where I must engage in rumour control. For there are several vicious – and viscous – stories about the contestants for the big chair of the Federation.

John L.: When it comes to rumours we have to be careful, Dirk.

Dirk: That’s correct, John, and yet I feel responsible, obligated, and terribly, terribly thrusty that something must be said in their defense. So, instead of naming names we’ll use code names, like Cameron, Ben and Omani. Wait, that might be too obvious, so let’s go with Bobby, Helen and Leo, just to keep their identities safe.

John L.: Um, ok. As we are quickly running out of time and space, what are the rumours to be controlled?

Dirk: For starters, it is not true that one of them read a study conducted in Regina that showed ripple chips promotes ass-leak, and now they want to take it to the next stage and apply it to humans.

Second, each of the candidates have never used the word “fantasticular”, which, as we all know, means to be both fantastic and ballsy. By the way, John, that’s how people refer to my column.

Dirk: The third rumour, I have to clarify, is true – one of the candidates did work at a helium factory, but quit because they did not want to be talked to in that tone.

And finally, John, each of the candidates have sworn that, yes indeed, Dirk Dashing was in fact the man sired by sunshine, cradled by moonlight, and breast fed by rainbows.

John L.: Well. That was of no help whatsoever, Dirk.

Dirk: What’s that, John? Why, yes, Levi’s does pay me to wear these jeans!

John L.: Ladies and gentlemen, that’s all we have. I’m sorry I did this.

Dirk says, Just because I imagined it does not make it any less true.