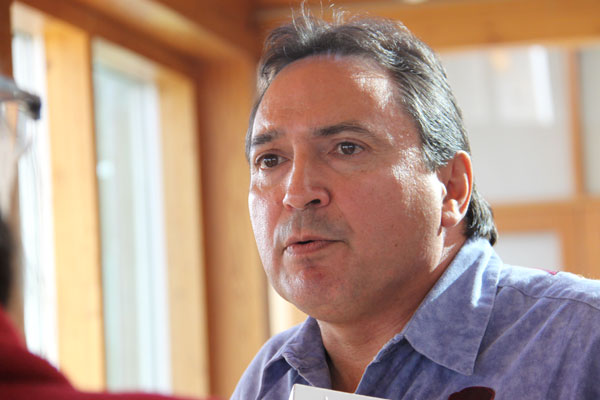 Assembly of First Nations Chief Perry Bellegarde has his hands full. Ten days into his mandate as Chief, Bellegarde already has the usual AFN detractors calling the AFN irrelevant and environmental activists calling the National Chief, Pipeline Perry.  It’s not like he didn’t know what he was getting into. Chief Bellegarde has been in politics for 30 years and active with the AFN for over a decade. He is aware of the challenges facing the AFN and First Nation people across Canada and now as National Chief, he has a chance to bring his experience to bear and see if he is the person who can finally unite the AFN and bring progress to many important files. We had the chance to interview Chief Bellegarde over the phone from Ottawa. Here are his thoughts in an EFN Exclusive.

EFN: The AFN has been in the spotlight for the last year and there was strong reaction from your acceptance speech. All the people that attacked the AFN before are now attacking you and calling you Pipeline Perry. How do you react to that and to the fact the rhetoric is ramping up already?

Chief Bellegarde: It is unfortunate that people will start shooting arrows at their own leaders. Our Elders have said it best. It is unfortunate that our people start bringing down our leaders when we are starting to get ready to fight government. When we get ready for battle, the elders say we should be smudging and praying for our leaders to get them ready to battle. So it is unfortunate but I have been around for a few years and you have to work through that, you have to bring all of our voices together and strength and energy together and point them in the right direction. We are not the enemy. We have to battle governments that don’t listen to us and don’t respect our inherent right and treaty rights.

EFN: Previously there was lots of difficulty in getting access to Prime Minister Harper or changing the will of the current federal government. How do you go about working with the federal government in this atmosphere?

EFN: Two big issues are education on reserves and missing and murdered Aboriginal women. What is the solution on education? The federal government put out this legislation with lots of strings attached but there is some money there. How do you move forward on this portfolio when it is one of the biggest needs in the community?

Chief Bellegarde: Something we need to get out to the public is the 40% funding gap that exists. What I mean by that is on reserve schools get $6500 per student for tuition, versus the $10500 per student off reserve in the provincial system versus the $19500 per student in the French system. That has to be addressed. That is the issue. We need to look at the equitable funding, not equal, but equitable. We are not going to jeopardize First Nation jurisdiction. We are not going to jeopardize our inherent and treaty right to education. Governments need to get that. We don’t need legislation to close the fiscal gap. We need to respect Indian control of Indian education. The Chiefs in Assembly passed a resolution that calls for a national fiscal framework respecting regional differences and approaches. That is the work we are going to get started.

EFN: Prime Minister Harper just came out and said that an inquiry into missing and murdered Aboriginal women wasn’t high on their radar. How do you push this inquest against the unmoveable wall?

Chief Bellegarde: Again, not to quit. This issue is one of the biggest black marks on Canada. Close to 1200 women and probably even higher. Two things are happening. In February there is a round table that will give an action plan so there is a coordinated approach in ending violence against Indian women and girls. But we are not going to quit on the push for this national inquiry. You got to keep pushing hard. There is a federal election coming up and we have to make sure this is front and centre in all the federal parties’ platforms. We need to get to the root causes and by having an inquiry it is going to educate everyone about the importance of the issue and start doing some dialoging and changing people’s attitudes. Education leads to awareness, leads to understanding and that leads to action. We are not going to stop our efforts to push for that.

EFN: Do you think your average Canadian citizen is an ally of the First Nations in Canada?

Chief Bellegarde: They can become allies if they are properly educated and made aware of the issues. For example, three quarters of Canadians support an inquiry into murdered and missing women. If they start talking and calling their Members of parliament they can be strong allies.  These Canadians, our brothers and sisters across Canada, are open minded people. If they knew that Canada was rated 6th in the United Nations development index on quality of life and if you apply those same indices to Indian people and we are sixty third.  That’s a huge gap. And that’s not acceptable in Canada. If a majority of Canadian people were aware, they would say what’s wrong with this. It is almost like third world conditions. They will get behind education and training. They will get behind investments in adequate housing and having access to potable water and get behind new ideas to help close the gap like resource revenue sharing. Like treaty implementation processes and full engagement with the crown. It’s not only good for our people, it is good for everybody. Because that gap will start closing. I see them as allies no question, but they have to become educated and aware of these issues. 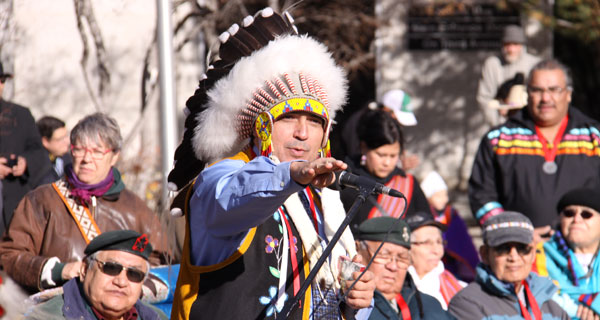 EFN: In regards to natural resources, you said that First Nations have to be at the table for any sort of development. How do you see the duty to consult and accommodate?

Chief Bellegarde: The way that things are right now, the status quo is not acceptable. The provinces are still issuing licenses to industry with no involvement of First Nations people and with no recognition or respect of Aboriginal rights. We say we still have unextinguished Aboriginal right and title to the resources beneath the depth of a plow in Saskatchewan. That is the treaty First Nations perspective. When we start talking about closing the gap, we are talking about resource revenue sharing. And I make that strong statement because of the recent Supreme Court decision in the Williams Case. Aboriginal rights and title are recognized and affirmed. Again, industry has a responsibility to consult and accommodate. We also have the Declaration on the Rights of Indigenous people that speaks to free prior and informed consent. We have some big tools. Industry and government want economic certainty where resources can be developed and sold to international markets. Well fine, but if you want that you have to make sure that Indigenous people are involved every step of the way from start to finish. And we want to be involved and we have to be involved not only because of the jobs and wealth generation that will happen. There will be no more becoming economically marginalized. We also bring that extra value added of respecting the land and the water we can offer balance and make sure that we have long term sustainable economic development strategies in place. Those are key things going forward. We can look at a national energy strategy that the feds can facilitate. First Nation’s people and government have to be involved.

EFN: If consultation doesn’t work and resource sharing doesn’t happen, we have seen the grass roots people rising up and the emergence of Idle No More, road blocks, blockades. What do we do in that situation when it has devolved so bad that it leads to confrontation and roadblocks?

Chief Bellegarde: We would hope that things don’t get that far. I have always said you need three strategies in place to get any kind of change. You need a legal strategy. How do we legally defend and stand up for our rights and title. You need a political strategy for both federal and provincial governments for engaging and dialoguing. And then, of course, political activism. I don’t call it civil disobedience. I don’t call it protests. It is basically political activism. All three have to be coordinated. We hope it doesn’t have to get to the point of activism, but government and industry have to be engaging with indigenous people and respecting our rights. That is what we hope.

EFN: How does the AFN engage the grass roots and have them feel included?

Chief Bellegarde: Idle No More was a spiritual movement. It came about because of Bill C-38 and Bill C-45 the omnibus bills where they lessened the environmental regulations framework for big projects and people said enough is enough and stood up to protect the land and water. The Idle No More movement is very powerful and strong and it was good because it engaged everybody. There was room for Chiefs, room for councillors, room for elders, room for women and the youth. It is bringing together everybody and that is how we are going to bring about change. It is not an us and them. We are all in this together and we have to harness that energy and it is all going to bring about change.

At the AFN we are going to continue to reach out using technology and make sure we are getting out to the communities. The AFN is a Chiefs organization, but remember the Corbiere Decision. Every First Nation person regardless of where they reside can vote for the Chief and Council, another order of government. That’s how it is set up.

EFN: Internally, how do you pull the Chiefs back together? You had a relatively low voter turnout and some apathy there, how do you reinvigorate the Chiefs coming together?

Chief Bellegarde: I don’t think there is apathy. I think with the millions of dollars in cut backs from Aboriginal Affairs, there wasn’t the capacity to show up at the meetings too. A lot of First Nations just didn’t have the funding to show up. I heard that numerous times. So that is an issue. The government has continued to cut funding for the last four or five years. Having said that, we are going to continue to review the charter of the AFN and continue to support the work from our Chiefs committee on Nation Building and keep asking the questions about what is working and what are the recommendations to make it a more effective organization. The Assembly of First Nations is very relevant, very responsive and very respectful of the diversity across this great land. And that is the work that I support.

EFN: Now that you have left, Kim Jonathan is now Chief of the FSIN. Did you give her any parting words of advice or encouragement?

Chief Bellegarde: I encourage her to stay strong. She has a balanced voice. We have two women Chiefs and two male Chiefs on the executive. It is a good balance. She has always been a team player and I encourage her to stay strong on inherent rights and treaty rights and keep working, listening and taking advice from the elders that we have in the FSIN and she will do well.

EFN: Anything special on the Christmas wish list this year?

Chief Bellegarde: How about a self determination process and full implementation of treaties according to their spirit and intent. And that our rights will be respected on Turtle Island. If there is a Santa Clause and he is listening, I have been a great boy.