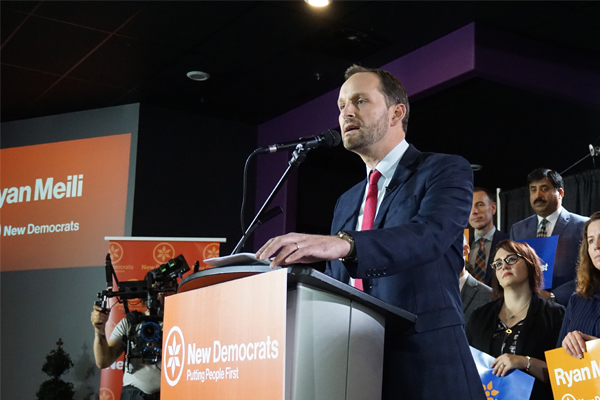 As the October 26, 2020, general election approaches, complex issues, including COVID-19 response, child welfare, and graduation rates, affect many Indigenous individuals and communities across the province.

Eagle Feather News reached out to Scott Moe, leader of the Saskatchewan Party, and Ryan Meili, leader of the New Democratic Party (NDP) to gain their insights on a handful of key issues, starting simply with the question of why Indigenous people should consider voting for their party.

“The biggest reason is that we're actually interested in Indigenous people, which is a pretty stark difference from what we've seen with the Saskatchewan Party,” said Meili.

“We recognize there is a big gap when it comes to the health outcomes, education, employment, and involvement in the justice system, and we need to close that gap. The province has been a barrier to that, and we instead will work to honour the treaties and work with Indigenous communities to close that gap.”

COVID-19 hit several First Nations and isolated communities in 2020, with many communities undergoing a complete shut-down. The northern town of La Loche had two long-term care residents die of the virus, prompting an epidemiologist from the University of Toronto to call it the most concerning COVID-19 outbreak in Canada at the time.

What will you do to help communities get back on their feet and ensure their safety as the pandemic continues?

“We've had pretty mixed messages... when it comes to the Sask Party and Indigenous communities,” Meili said.

“I was on the phone in those early weeks of COVID-19 with community leaders, who were just asking for support to get masks and other equipment, to get clear guidance on how to do check stops and closing their communities if they wanted to, and they just weren't getting any answers.”

Meili said the first step is to develop better relationships with these communities. He said many First Nations businesses and individuals are struggling financially and there needs to be an investment in people and communities now. As cases go up in the fall, the government must communicate with clear messages and clear support for communities to stay safe, he said.

This year also saw the highest number of drug overdoses and overdose deaths in the province in a decade. What will your government do to support these at-risk individuals?

Meili said that, as a doctor, the lack of addictions treatment facilities is frustrating.

“Patients would come in and say, ‘I’m ready to change,’ and there would be no (treatment centre) bed. They’d wait months to see a psychiatrist and it’s hard to get a counsellor. (There’s) so little support for mental health and addictions,” he said.

There are far more people using crystal meth and more dangerous opioids than in the past, he said.

“We’re losing people. Far too many. We need to work in harm reduction so the people that are using are safe… We want people to have the support to get past their addiction, but also make sure that while they’re struggling and using, they’re able to do so in a way that they’re not getting HIV or Hepatitis C, or dying of an overdose.”

Meili said he is committed to expanding the supports, with more community-based counselling, so people can get help early and have easier access to addiction counselling that lasts long enough for people to get clean and build up strength to stay clean.

Recently, Indigenous high school graduation rates saw a decline in Saskatchewan, according to data from 2019, in which three-year grad rates dropped to 43.4 percent from 44.5 percent. How is your government going to improve Indigenous graduation rates?

Meili said schools need to be adequately funded and that underfunding is happening both on and off-reserve.

“We need to fund our schools well enough so that when kids are in schools, they’re getting supports that meet their needs,” he said.

“We also need to be thinking about the upstream factors that influence whether kids will succeed in school. We have a quarter of Saskatchewan kids living in poverty. A majority of those kids living in poverty are First Nations,” he said. “We want kids to graduate, we want to make sure they have a decent place to stay, we want to make sure they have enough to eat, that they have some hope in their lives.”

“That all comes back to that approach to closing those gaps and making sure every kid has a chance both at home and in school to be successful and safe.”

Finally, child welfare in Saskatchewan remains a critical issue, with 3,412 children in the province's care last year, 86 percent of whom were Indigenous. Additionally, 25 child welfare deaths have been recorded this year.

Do you have a plan to fix or improve the child welfare system?

“We need a very thorough review of the child welfare system We’ve seen the number of kids who are in care grow and grow. We’re over 5,000 kids that are separated from their family now. We still see birth alerts and adoptions at birth… This is a system that isn't working, this is a system that is an extension of residential schools, and a precursor for a lot of people lining up in corrections,” said Meili.

Meili said the NDP would do a complete review of the child welfare system, and put programs in place to help support families and keep them together. They would provide culturally appropriate homes for children who do need to be put in care, he said.

Meili also committed to providing free tuition for youth who reach 18 while in foster care.

In the days before the writ was issued to formally begin the election period, a representative provided email responses from staff in the Government of Saskatchewan Ministries of Health and Education. These did not include a response to the question of children in foster care.

Because this election-related story is about political party leaders’ views, we made several attempts to speak with Moe, but he did not respond.