Youth conference theme is learning and getting along with each other 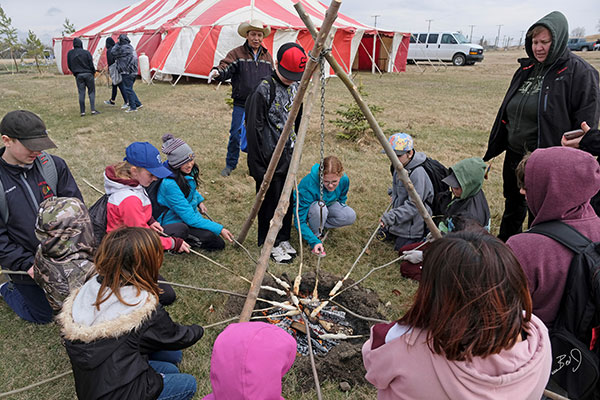 Harold Littletent makes bannock on a stick with the youth at the youth conference at Manitou Beach. Photo credit: Bev Jay Photography

The students participated in activities such as teepee teachings, bannock making, smudging, dream catcher making, treaty lessons and listened to various elders talk as they shared their knowledge.

“Since this youth conference involves First Nation and non-First Nation students, the theme is learning and getting along with each other which is a reconciliation process,” said organizer and MC Morris Longman in an email.

MC and organizer Harold Littletent, who teaches culture, legends and history at various schools, said he worked with the Watrous board for two and a half years and discovered that they wanted to make something for First Nation and non-First Nations children to work together.

“I was so proud to say this morning I am here teaching some children and we have about two hundred and some students,” he said.

Jennifer Jackson, a grade seven teacher at Watrous Elementary School, believes a youth conference like this is a step in the right direction.

“I think when you start with young people and establish positive relationships at the school age it’s only going to serve our society better to have a cooperative relationship,” Jackson said.

Watrous was first approached to participate in the conference by one of the organizers and agreed it would be worthwhile.

“Any time we can partake in First Nation education it’s a healthy way to promote relationships, positive viewpoints and more understanding,” said Jackson. “It’s held at Manitou Beach which is our community and several members of our community were part of its creation or development, so we always try to take advantage of those opportunities.”

Jackson hopes there will be more events like this in the future for students to participate in.

“I think there is always opportunity to have more people involved and for a greater audience as well…as people become more familiar with it, I think it is going to foster a healthier world view of how things need to go,” she said.

This is the first event of its kind to be held at Manitou Beach.