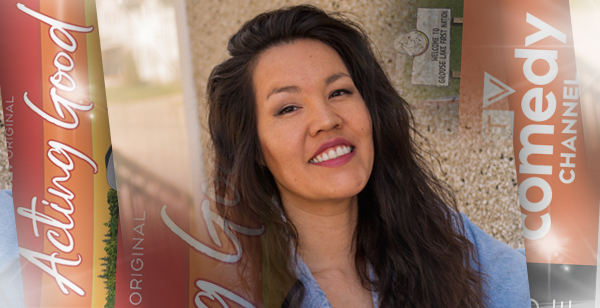 Cheyanna Sapp, a University of Saskatchewan student, is enjoying her new-found fame as part of a groundbreaking new Indigenous sit-com Acting Good on CTV’s Comedy Channel. Photo supplied by Sapp

“I never thought making memes would get me this far,” she said. “But hey, here I am!”

She is the first to admit her rise to television stardom is unconventional and wasn’t really part of her plan.

“I never thought that being a funny person would take me anywhere in life other than I might have more friends,” said Sapp.

Originally from Little Pine First Nation, she has landed a role on the ground-breaking Indigenous sit-com Acting Good that debuted on CTV’s Comedy Channel on Oct. 17.

The series is produced by CTV Comedy in association with former North of 60 actor Tina Keeper’s Kistikan Pictures.

No one is more excited about the opportunity than Sapp herself.

The show is set in the fictional fly-in community of Grouse Lake First Nation located in northern Manitoba. It stars comedian Paul Rabliauskas who returns home after his attempt to make it in the big city failed.

Those who know Sapp, especially on Facebook, are aware of Sapp’s comedic genious.

Around 2019, she took a stab at being a stand-up comedian. At the time she was at the U of S pursuing an Indigenous Studies degree and decided to also study theatre to improve her stand-up performances.

Sapp’s continued presence online and on-stage provided her with the opportunity to meet others in the industry, including Rabliauskas who forwarded her name to the show’s producer.

“Tina Keeper messaged me via Facebook, to ask if I wanted to audition,” said Sapp. “That in itself is like a dream come true for me because I’ve been a fan of (Keeper) ever since North of 60. I was so elated, and then I said, ‘Yes, of course I want to audition.’”

She was selected to be part of the cast.

Filming of the 10-part series took place in Winnipeg over the spring and summer, which worked well for the full-time student.

She is back in Saskatoon to complete her education.

Sapp is proving anything is possible and that includes having a successful career without having to leave home.

“I didn’t even know there was a big comedy scene here in Saskatoon,” she said. “I had no idea until two or three years after I moved here. I started attending open mic (events), and then I actually went up and tried out some of my jokes. It worked out really well.”

Sapp’s advice to others is to sign up for acting or performance training and then “just put yourself out there.”

“Networking helps a lot because that’s what’s gotten me to where I am, and just be yourself,” she said.

Sapp plans to continue in the industry and see where it goes.

“I never really thought to put more time into being funny,” she said. “(Often it’s) the things we don’t think we can build on that are actually our strongest qualities … But if you practise it, and work on it, it could potentially take you somewhere.”

Sapp is glad she decided to take a chance on herself because she is now in a place where she can make a positive difference in the industry.

“I believe in Indigenous representation in TV that’s authentic,” said Sapp. “That’s one of the things I’m working towards. I feel it’s my duty to ensure our stories are being told from our perspective and being told correctly and authentically. “

Acting Good airs every Monday at 8:30 p.m. on the CTV Comedy Channel.