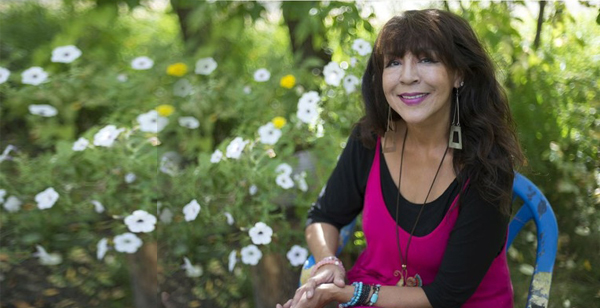 Carol GoldenEagle, Saskatchewan’s Poet Laureate is one of the newest recipients of the Saskatchewan Order of Merit. Photo supplied

Carol GoldenEagle is more than just living the dream; she is thriving.

From as far back as she can remember, she knew she wanted to be a writer.

“Sometimes what we write is the very medicine someone else needs,” said GoldenEagle.

The thought of being able to help others motivates her to keep going even when the subject matter is sometimes tough.

GoldenEagle, the Saskatchewan Poet Laureate, is a 60s Scoop survivor who loves to express herself through her art whether it’s writing, painting, storytelling, singing or dancing.

Growing up in a non-Indigenous home meant, as a child, she had to deal with racism, displacement and self-hate, which are topics she expresses through her art.

GoldenEagle said she was thrilled and filled with gratitude when she received the news that she was selected to receive the province’s highest honour.

Although she always knew she wanted to be a writer, she did start out her career as a journalist.

“Media was a plan B,” said GoldenEagle. “I had a good time. I am really happy I made the decision to say, ‘Alright I won’t be an author right now at age 17.’  Or however old I was because it allowed me to travel across the country and meet the most amazing people.”

As a journalist, she began connecting with people who introduced her to all the other wonderful aspects of what it means to be Indigenous.

“I was raised to be ashamed of my Cree/Dene heritage,” said GoldenEagle. “All the stereotypes I constantly heard as a child, so when you hear that from the people who were supposed to be taking care of you, you believe it because you don’t know any better when you’re four or five years old.”

After reconnecting with Elders and Knowledge Keepers, she began learning her language and began dancing and singing.

“I started learning who I am as a Cree/Dene woman,” said GoldenEagle. “It’s wonderful to be given that gift and, in a roundabout way, it was given to me because I was in the media.”

In 2008, she left media and journalism behind her to pursue her first love — writing.

“I had to believe that it was going to work out and it’s what I’m supposed to be doing,” said GoldenEagle.

Since taking that leap of faith she has written eight books.

She hopes to have a release sometime in the spring, which she’s really excited about.

This new project doesn’t mean she is going to stop producing poetry and other literature.

GoldenEagle’s next project Stations of the Crossed is a book of poetry that examines the dark legacy of the Residential School system, church and government doctrine and the intergenerational impacts affecting Indigenous people across Canada.

She believes writing is therapeutic so she shares her thoughts and emotions in her writing.

“I’m outraged by all those things that happened to us (as Indigenous people), but at the same time I can’t let it consume me,” said GoldenEagle. “I have to be positive and live with love and pass that on.”