Featured Case: Matthew owed SaskPower and was making the agreed payments, so why was his power cut off?

If you think a service provided by a provincial government ministry, agency or health provider, or municipal office has been unfair to you, the Ombudsman’s Office may be able to help. Here is just one example of a complaint that came in. (The name was changed for confidentiality.)
For more complaint examples or to find out how to make a complaint, visit www.ombudsman.sk.ca. 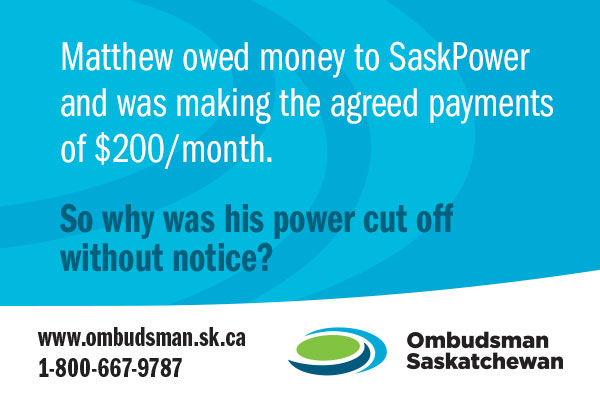 Unplugged
Matthew called us because he did not think it was fair that his power was disconnected without notice when he had been making the agreed payments to clear his debt to SaskPower.

Matthew is a senior with limited means. Some tenants had left him with a large unpaid power bill and a fire in his home had left him with additional expenses. At that time, he had received a disconnection notice from SaskPower and had contacted them. Since he could not pay the full amount, it was agreed that he would pay $200 a month and a load limiter was installed, which allowed a reduced supply of electricity to power a few essential devices or appliances.

This was important to him because he had been diagnosed with a breathing disorder and his doctor had prescribed the use of an air purifier and a CPAP machine to help him breathe at night. The load limiter allowed enough power for him to use these appliances and heat up his meals. For the next five months, he made his $200 payments and one month paid $400. His power was then disconnected without notice.

When Matthew contacted us, he said he didn’t understand why he was disconnected and just wanted to re-establish the agreement that he had before. When we contacted SaskPower, they told us that they had been getting tougher with delinquent debts and since it was no longer winter, they had been making some disconnections. They agreed that Matthew’s situation was complex and said they would review it. After reviewing his file, SaskPower said that if Matthew could pay a portion of his debt as a lump sum, they would reconnect his power with the load limiter and he could pay $210 monthly until the debt was paid off. A family member was able to help him with the lump sum payment and his power was reconnected.