A love of storytelling has led to a career of teaching 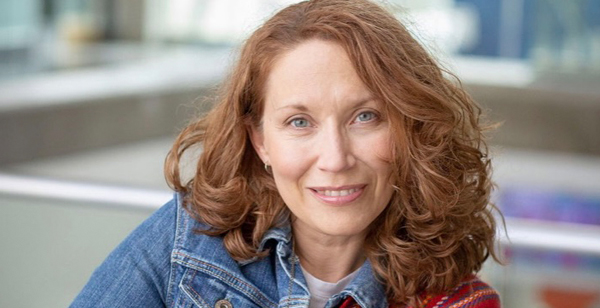 “The struggles to finish my program were there, but they were definitely worth it,” she said.

Fiddler-Potter believes the best part about the experience is being able to show other Indigenous students that any goal is attainable.

“Sometimes you can’t always see yourself somewhere if you don’t know anyone who’s done it before you,” she said reflecting on her educational milestone.

Fiddler-Potter’s education journey began with a journalism degree from the University of Regina (U of R). After graduation, she landed a job at CTV before starting her career at CBC.

Around 2000, she was recruited by the First Nations University of Canada (FNUniv) to be a mentor to up-and-coming journalists in the Indigenous Communications Arts (INCA) Summer Institute.

“Being part of that program does not stop when the class ends,” said Fiddler-Potter. “I still have former students who contact me and we talk about what might be a good move and what they want to do in their career.”

After her time at INCA, she decided to pursue a Master of Arts in Canadian Plains Studies at the U of R while being a full-time journalist.

In addition to her already heavy workload, Fiddler-Potter began working as a sessional lecturer for the Indigenous Studies department at FNUniv — a position she held for 18 years.

“Merelda Fiddler is the hardest working person I have ever met in my life,” she said. “She’s done more at five in the morning than most people will do all day. She’d probably be wasted being a regular journalist like me because she’s able to put together with her work some important knowledge about the way we tell stories and how that shapes the world we live in.”

Fiddler-Potter juggled her two passions for several years, but reached a point in her life when she needed to make a decision on where to focus her energy.

“I left CBC and was working at First Nations University when a discussion with a colleague made me realize that our work should give back to the community,” she said. “(As an academic) you’re constantly trying to find ways to be of assistance and make things better, add value, and build bridges.”

Fiddler-Potter began the doctor of philosophy program four years ago at JSGS with a focus on Indian Residential Schools and public policy.

“When I was looking for a Ph.D. program, I really looked at what I had told for stories (as a journalist) and the kind of things I wanted to do in the community,” she said. “And probably more than anything else, I told stories about public policy and government and when we think about it, public policy affects all aspects of our lives.”

“The history of public policy are things like Residential Schools, the 60s’ Scoop, the forceful movement of Métis communities from the south to the North, the policies around relocating Métis people out of Red River, and other policies of that nature that traumatically affected Indigenous people in this country,” she said.

Being able to understand policy and how the government works is essential for the community to change things for themselves and ensure their voices are heard, said Fiddler-Potter.

Her research work dissects the role of the media in helping Canadians to better understand public policies dating back to colonial times and how that has shaped the Indigenous realities of today.

“Public policy for me has been a continuation of my journalism career,” she said. “It’s not that I left journalism, it’s that I continued to pursue areas where I hope to make a difference.”

For her, this means building a bridge between Indigenous and non-Indigenous communities.

On a personal level, being a mom of two kids and a wife has sometimes proved tricky but she has been able to make it work with her family’s support.

“My husband is amazing and he has been a huge support through all of this,” said Fiddler-Potter. “He’s always cheering me on and always available to take the kids if I need a day to write or something.”

However, she worked doubly hard to make certain she completed her work in three years, which was a heavy load but she’s happy it’s done.

Another major challenge was finding a way to incorporate Indigenous methods in a respectful way.

Knowledge translation sessions are what’s next for Dr. Fiddler-Potter.

“Taking my work out into the community, whether that’s in the form of a TED talk or panel, is the next step and those plans are underway,” she said.