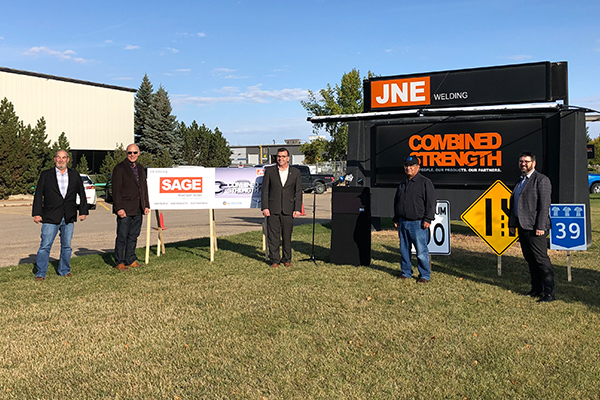 A new business owned mainly by two Saskatchewan First Nations has landed a contract to supply highway traffic signs in a pilot project with the Government of Saskatchewan.

The new company, SAGE Roadway Signs, is a division of Saskatoon-based JNE Welding, whose majority owners are Peter Ballantyne Cree Nation and English River First Nation. Many of its 140 employees are Indigenous.

“This provides an opportunity to diversify our business and create employment opportunities for Indigenous people. As well, this underscores the success of economic development initiatives on the part of our majority owners – Peter Ballantyne Cree Nation and English River First Nation,” said JNE CEO Adam Logue.

The six-month pilot project creates two jobs with the possibility of more in the future.

The new company will make more than 3,000 signs, such as stop signs and diamond-shaped turn signs, for the province, which last year repaired or replaced 13,000 of them. There are about 120,000 provincial road signs in Saskatchewan.

SAGE joins a small field of sign suppliers in Saskatchewan, “so this has the potential to become an important partnership,” the government said in a news release.

It “demonstrates our commitment to Saskatchewan suppliers and helps a local company grow,” he said.

JNE Welding provides custom fabrications to the energy and mining sector in Saskatchewan and Alberta.