Awards highlight economic development as a bridge to reconciliation

The 2019 Affinity Credit Union Reconciliation & Partnership Awards were given out on May 2, 2019 during the Intersections for Growth Conference in Regina.

“The reason we conceived them SFNEDN and SEDA was we were trying to highlight…economic development is a bridge to reconciliation in Saskatchewan,” explained SEDA CEO Verona Thibault.

Nominations were opened in December to the public for anyone to nominate whomever they thought was doing good work in their community. SFNEDN also shoulder tapped certain people to be nominated for the awards who they thought were fitting. After the nominations came in SFNEDN then looked at the different applicants individually and picked according to whom was having the biggest impact in Saskatchewan explained SFNEDN board member Heather Exner-Pirot. 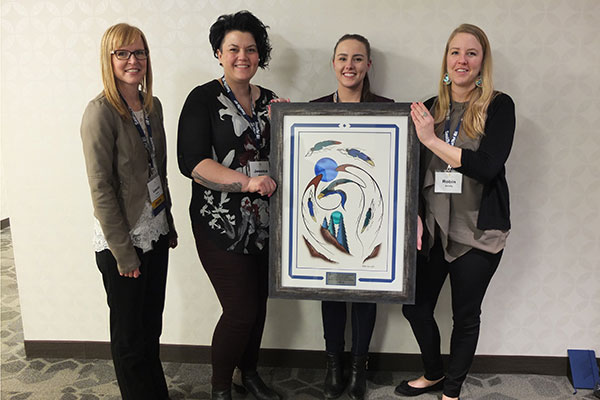 “Finding out we had won…the award was a great pleasure. I had the opportunity to tell the group and seeing all their faces being so happy for being recognized for all the work they had done it was a great meeting to see all that,” said Johannesson.

The Prairie Rivers Reconciliation committee formed in January of 2018 and works on education and relationships in their region which consists of roughly 40 organizations. They do everything from having guest speakers come to committee meetings to talk about treaty history and anti-racism and things of the sorts in what they call their internal education. This year in October for their external education they are holding the second annual rural reconciliation conference in Martensville which will have roughly 200 attendees with ages from elementary school children to senior citizens.

“I think it’s important to show role models of what is possible, what can be done and how economic reconciliation is not just the smart thing to do but it’s the right thing to do,” said Exner-Pirot. “There’s a business case and there’s also a moral case for people to do important work and make sure we are inclusive of all our groups and all our areas of Saskatchewan economic development.”

Thibault expressed her agreement. “I think it’s a good way to recognize the good work that is happening in the community and it’s the kind of work we want to promote in the future,” she said.

Although Johannesson would like to have more organizations participating in these causes she thinks the most important thing is education on a shared history, coming together, and working towards reconciliation so that it becomes a norm.

Thibault thinks that although there may be a few setbacks Saskatchewan can be a leader in reconciliation and economic development partnerships in Canada and believes the foundation is there for the province to be a leader so giving accolades and having these conversations is important.