Words of our Elders: Noel Starblanket 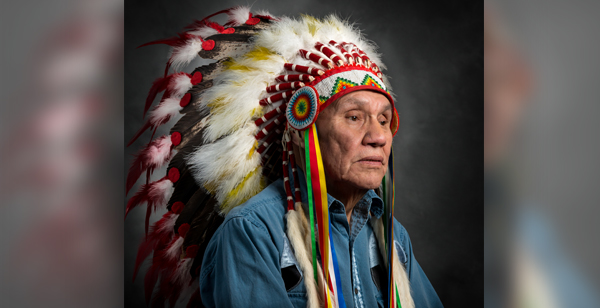 The late Noel Starblanket reflects on ceremony, hunting, Treaty and leadership in his far ranging interview with Ted Whitecalf for the book acahkosa k-ohtakohpit-One who uses a star for a blanket. Photo by Ted Whitecalf

These memories of Noel Starblanket, are excerpts from the book Acahkosa K-ohtakohpit-One who uses a star for a blanket. The elders were recorded, photographed and published by Ted Whitecalf and a team, including Marilyn Poitras, Sheldon Poitras, Darren Okemaysim, Marion Goodman, Penelope Sanz, Jacqueline Gabriel and the late Pamela Whitecalf, Sweetgrass Records. Check back monthly for words from our elders.

My name is Noel Starblanket. I was born September 27, 1946. My middle name is Victor. I was named after my dad. When I was a baby, my parents took me to my grandparents, my dad’s parents, to be named and, in that ceremony, I was given the name Pahpahtaywakihiw, which means loosely translated Spotted Eagle. I went through life and became involved in politics and a whole bunch of other things that were not in keeping with our traditions….

Other than that, I try to support young people who are in leadership positions now. Some of them don’t understand what I went through, the experiences I went through. One of the fondest recollections I have is when my dad was a Chief. In those days they didn’t have per diems or government money for travelling around and things like that. The Chiefs decided to take the provincial vote on alcohol. In the early 1950s, I was just a little child, my dad was a Chief and there were other Chief’s in Southern Saskatchewan who didn’t agree because the Treaty didn’t call for that so they formed their own organization called the Qu’Appelle Advisory Council of Chiefs Independent that followed the Treaty. It was based entirely on Treaty. They went around to communities and I would go with my dad. The Chief hosting the meeting was the Chairperson of the meeting and that’s how they did it, very democratically. All different communities around Southern Saskatchewan, I remember that. Late Lawrence Thompson and late John Gamble, people like that, were part of that with my dad. They took up a collection either they made a pie social or something and they gave all those people a little bit of gas money to get home and fed them. They had their meetings and talked about Treaties. I grew up listening to that.

I was able to write so my dad would say write down what you remember about these Old People talking, these leaders, so I would write for him and I’d bring it home. We didn’t have power or electricity or anything like that, running water, nothing, just a coal oil lamp, we used to have to cut wood. At night, he’d take out his Treaty book and say read for me because his eyes were failing, all those years he was reading at night with that lamp, very dim light. So I would read for him about the Treaty and that was my steeping in learning about Treaty. That’s how I picked it up, going around with all those Old People. I was very honoured. It didn’t mean much to me at that time, it was a chore, but later on in my life, I realized how fortunate I was to have that experience, knowledge and education.

I also remember the Department of Indian Affairs Indian Agent would come in twenty below and we never invited those people in our house. He sat outside in his little half ton truck, Citizenship and Immigration on the side, that’s where Indian Affairs was in those days, he would open his window just enough for my dad to talk, he never invited him in his truck, and he would conduct business through that window. My dad would stand outside in twenty below and that’s how that Indian Agent conducted business with my dad who was Chief. I’ll never forget that, it was a very poignant experience for me to see. I used to look out and watch them. I used to wonder what they were talking about. I used to wonder, you know. Stuff like that I grew up with and, of course, we did a lot of hunting.

I remember hunting rabbits with my brothers. I had five older brothers, I’m the youngest son. We used to hunt rabbits and we’d get maybe forty or fifty in a day. We’d take them out and give them to people in the community. Same thing in the summer, ducks. We’d get maybe two hundred and go around giving them out. I remember going to pick sweet grass with my grandfather and grandmother and picking Seneca root and other medicines, mint. They would teach me how to pick them. They had homemade diggers and after we’d pick, we’d put them out and dry them. After they were dry, he’d take his tobacco in the Star Blanket Village, the west end, and go to the Old People. Those Old People didn’t speak English. They didn’t have English names Mistihkoman,  Waniskaw Old Wake Up and all those Old People just spoke Cree. My grandfather would go and give them tobacco and tell them come tonight to the house we’re going to sing, pray and make medicine. I would sit with those Old People, and they’d laugh and tell stories and then they’d get serious. They always had their pipe, and they’d pray and sing and then make medicine and give everybody who was there a little bit of medicine, maybe a package, for their sicknesses or whatever. I grew up with that.

My grandfather was a Sun Dance maker. I remember, I was six or seven years old, maybe, they had this tipi, the first night where they had all those sacred objects, they would pray and sing. They’d have Oskapewis looking after these things and he said somebody always has to be with these things. You can’t leave them. If everybody leaves, you have to be there. Well, son of a gun, if it didn’t happen, they all left and I was the only one there. I was scared. I didn’t know what to do. I was keeping the fire, keeping the smudge going. I could hear murmuring and I‘d look around, I’d be scared. I kept it going anyway. I don’t know how long it was, it seemed like an hour, but it was probably only about five minutes. Scared the heck out of me so this guy came back and, boy, I took off out of there. I was telling my cousins and brothers, those guys left me and scared the heck out of me. They just laughed at me. That was my first spiritual experience I recollect. I’ll never forget that and, of course, I had many more after that with my grandfather and grandparents.

Later on in life, I began to understand the powers of my grandfather or grandmother and their connections. People would come from many hundreds of miles to see him for his medicines and healing techniques. He never went anywhere. They always came to him and, often times, just for tobacco he did these things. I remember him, also, healing me when I got sick. Some Metis people lived on the edge of the reserve used to come and see him and my Grandmother.

(Ed. Note: This Elder’s Story is an excerpt of a longer piece that will be available on the Eagle Feather News website as of June 30, 2021).