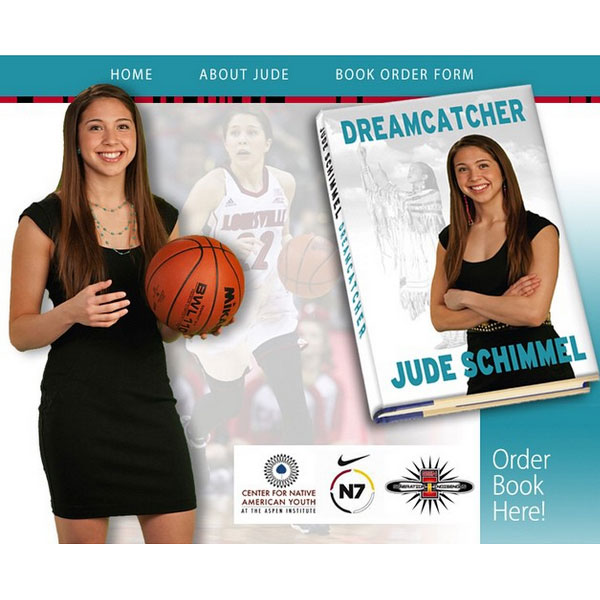 The book takes a look at her journey from the Umatilla Indian Reservation in Oregon to one of the most recognizable names in women’s basketball and the Native American community. Through hard work, dedication, focus and perseverance, Schimmel has beat the odds and succeeded “Off the Reservation” at a young age.

“I want to positively impact other Native Americans so that they can live the life they want to achieve and fulfill the dreams that they have,” said Schimmel. “I went through and witnessed similar struggles that many Native Americans go through and want to share that with others. I want my story to show that there can be great success found both on the reservation and off the reservation.”

“Dreamcatcher” shares Schimmel’s story of growing up on a reservation, and what it took to succeed in the “real world” outside of reservation life. Jude shares many of the lessons her parents instilled in her, as well as many she learned along the way. She presents these in a unique way, using some of her favorite inspirational quotes and personal stories. She also makes it a priority to help everyone gain a better understanding of Native Americans, and the oppression that still exists amongst these special people today.

Jude Schimmel is expected to continue her basketball career in the professional ranks this summer and is projected to be drafted in the upcoming WNBA Draft in mid-April. Jude Schimmel is the younger sister of Shoni Schimmel - the eighth overall pick in the 2014 WNBA Draft by the Atlanta Dream and the first rookie to ever be the MVP of the WNBA All-Star game. The 2015 season will be her second in the league.

The Mission, Oregon native was a member of Louisville’s winningest class in program history, posting 112 career victories, including four 20-win seasons and one 30-win campaign (33-5 in 2013-14). Schimmel reached four NCAA Tournaments, including an appearance in the Final Four (2012-13), Elite Eight (2013-14), and NCAA Sweet 16 (2014-15). The previous school record of 107 career wins was held by her sister, Shoni Schimmel’s graduating class.

Having been embraced by the Louisville, Ky., community while playing for the Louisville Cardinals and an instant draw to Native American fans throughout the country, Schimmel has used her platform as a collegiate student-athlete to share her story of drive and determination.

She finished her career at Louisville ranked in the top 10 in program history in career assists while piling up over 700 career points in 135 games, including 15 in the NCAA Tournament.

Alongside her sister, the duo may be best known on the court for a historic run to the NCAA Championship game in 2013 that included a shocking 82-81 upset of top-ranked Baylor and Brittney Griner in the Sweet 16 and win over traditional power Tennessee in the Elite 8.

Recently named a Nike N7 Ambassador, Schimmel visited the White House in early April as she continues to work towards sharing the struggles of the Native American community and find ways to improve opportunity for Native American youth in the 566 federally recognized tribes in 35 states nationwide in such areas as education and healthcare. Overall, there are over 2.1 million Native Americans under the age of 24 in the nation, with over 32 percent under the age of 18 living in poverty and nearly 30 percent lacking health insurance coverage. Suicide, the second leading cause of death for Native Americans aged 15 to 24 is 2.5 times more likely among these individuals than the national average. Educational opportunities are also a struggle for the Native American community with just 50 percent graduating from high school and 13.3% earning an undergraduate degree.

Jude will also be starting a foundation with part of the proceeds going towards supporting Native American causes.