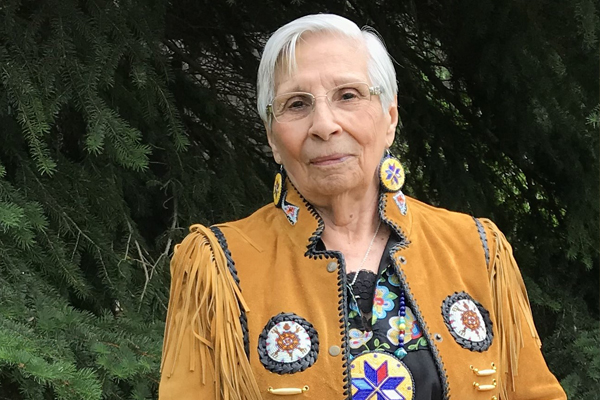 Nora Cummings was raised to work hard and support her people.

Born and raised in Saskatoon, Cummings is the daughter of Jerry and Irene Ouellette, who came from the historic Round Prairie Metis settlement south of Saskatoon. She says her father was hard working and perfectionist and her mother was extremely smart, though not educated.

Cummings grew up cutting wood, working with horses and hauling water with her father. She remembers taking a horse and wagon with her father across the Broadway Bridge in 1953.

At home with her mother, she helped care for her baby cousins and often attended to four or five children by herself.

“I got my teaching and culture from the old people, my aunties and uncles. They taught me to cook traditional foods, how to crush chokecherries and dry berries. But while doing this, they never said 'you didn't do this right'. They were good teachers, they said 'we will try this differently.’ And all the while, they were telling us stories. Those were my teachings,” she said.

On October 16, Cummings, a long-time Senator with the Metis Nation-Saskatchewan (MN-S), received the YWCA Women of Distinction Lifetime Achievement Award.

In a recent interview, Cummings recalled her decision to quite school at age 14 with only a grade five education. She attended St. Joseph Elementary School, which now houses Oskayak High School.

Most of the students there were Metis and the teachers were nuns, who punished children with the strap, threatened them with God’s condemnation and told the girls their role as a woman was to “make a good housewife,” Cummings said.

Before Cummings left, Sister Edeltrude McCarthy gave her a prayer book, rosary, and encouraging words, all of which Cummings still carries with her today.

“She told me, 'always to be proud of who you are. Always. You can do whatever it is you want to do, you just have to believe in yourself. Never be afraid. And always respect other people.

“I never forgot those words. She instilled a lot of strength in me. To me, she was my guardian angel, and I always think of her.”

At 16, Cummings got married and had the first of ten children (eight biological, one adopted, one from another marriage.)

“I never thought it was a challenge,” she laughs. “It was just how I was raised. I taught my children how to work in the home. Everyone had a job. I only had one daughter... and (I) said to the boys, ‘she's not going to do all of this. You're going to learn to wash clothes and cook and clean.’”

After two marriages, she met Henry Cummings, a Metis man from Buffalo Narrows.

“I finally found the love of my life,” she said about her husband. “We had 38 years of a beautiful marriage, a beautiful partnership. We really had a great life together.”

In the wider world, she fought to get Indigenous children out of foster care.

“We found out how our children were being apprehended without the mothers having the opportunity to work with their children. A lot of these people lost their children, not because of alcoholism or addiction, which was sometimes the case, but sometimes they just came in and took them.”

Cummings met with social services and government officials to get children back to their families.

In 1973, Cummings became the first Indigenous woman to run for city council in Saskatoon. During the campaign, she received “ugly” letters telling her to reform her children or stay home.

Her husband encouraged her to stick with the race and she remembered Sister Edeltrude who’d told her she could do anything. She wasn’t elected, bust says she learned a lot.

“It isn't about me. It's about the work, and women who give me that strength. It was my job to do the best I could for them,” she said.

Cummings remains active with the MN-S and has seen it grow and fall many times.

“I'm very disappointed in our nation right now. I don't think it's serving the purpose of our people and elders,” she said.

“It's not healthy… It's not reaching our people, it's reaching only certain people.

She would like to see greater inclusion of elders, young people, and families.

Cummings is compiling her life stories and photographs into a memoir, and passionately backing the re-election of Saskatoon Mayor Charlie Clark.

“Looking back, the work I've done with women and with young people – that's near to my heart. Those are the things to me that mean something and will continue to live with me.”