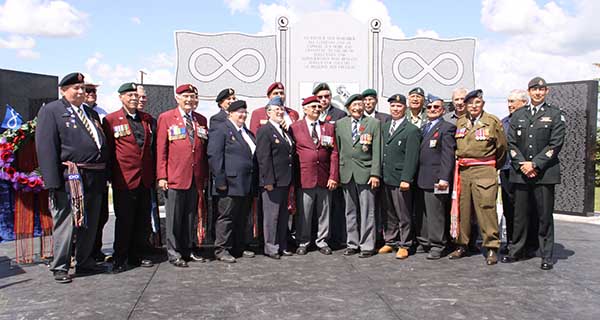 Joel Pedersen, far right front, joined several other veterans at the unveiling of the Métis veterans monument at Batoche. Photo by John Lagimodiere

The Canadian Armed Forces (CAF) has designated the week of November 5-11 as Veterans Week.

As well, November 8 is recognized as Indigenous Veterans Day here in Canada. In the past, the week before Remembrance Day was a Speakers Program where current and retired members of the Armed Forces would share their experiences. With COVID-19, the program is gone to a virtual platform with videos available for Canadians to watch. Let us find time over the next week to mark the importance of 2020, as this is also the 75th anniversary of the end of the Second World War.

Have you ever wondered what our lives would look like without our community’s women and men who volunteered during the First World War and the Second World War? Would we have the Métis Nation - Saskatchewan and the Federated Sovereign Indigenous Nations? A number of the founders of both these organizations were veterans of these wars. They advocated for better treatment and changes to the Indian Act, in order to have the same civil rights and privileges as others in Canada. These freedoms for Status Indians came about slowly, including the right to vote in 1960 and the end of residential schools 1996. Some Indigenous veterans’ benefits are still being negotiated with the federal government.

The ranks of the old guard from the Great Wars are quickly thinning out with only a few still with us from the Second World War and Korea. As I recall from years ago being part of Remembrance Day parades, there were hundreds of the old guard, you could hear them march out. Now many have joined their comrades, having had the opportunity to live and see change.

The Canadian Armed Forces recognized the 75th anniversary of the end of the Second World War while implementing COVID-19 health measures. Small gatherings and virtual ceremonies were held to pay the respect we all owe to those soldiers, sailors, and aircrews who fought in the Second World War. This November 11 virtual gatherings will replace public gatherings or parades of remembrance. It will be a significant change for myself and many soldiers and service members who I know.

I am always inspired and honored to visit communities that show respect to their community’s veterans. As I see the names engraved on some of the monuments, I recognize some of the family names of people I now know. The connection is real and it continues.

Although November 11 Armistice Day or Remembrance Day is only once a year, we can make time during Veterans week, to recognize our community members who volunteered, and still volunteer to protect and serve our country and communities.

I don’t think of myself as a veteran or a hero, but I did get the chance and still do to work with some of them, and for that I am grateful. At this time of year I remember those of my friends who did not make it home from places like Afghanistan and Yugoslavia, and those who lost their battle back in Canada. It is my responsibility to never forget them. RIP: Shane Keating, Josh Roberts, Justin Boyes, Aaron Wienberger, Chris Bourque, Grant Fraser and Mike Priddle.

“All my life I had wanted to do something to help my people, and to show their good name” Sgt.Tommy Prince MM