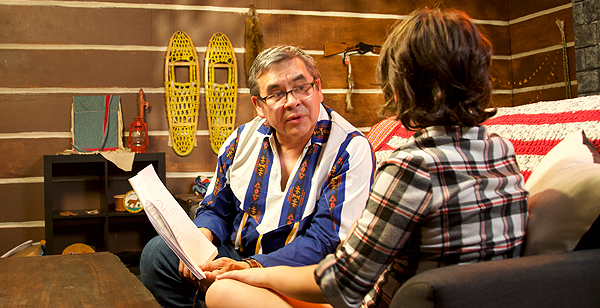 Morris Cook on set of a new children’s Cree television show being filmed in Saskatoon. Cook plays the role of the mosom and in the photo he is seated with his co-star Claire Walker who plays his granddaughter. Photo by Bee Bird

Campfire Stories Video Production (CSVP) has teamed up with Indigenous Knowledge Holders, storytellers and filmmakers to create “Stories of the North,” a television series to teach children how to speak Cree.

In the Industrial area of Saskatoon lies an unassuming row of warehouses; hidden among buildings is the office and studios of CSVP, which is just above the studio of renowned cinematographer George Hupka, owner of Downstream Pictures.

Nestled even further within the studio is a trapper’s cabin complete with a fireplace, traps and snowshoes on the wall.

The team is working on “Stories of the North,” which is a 10-episode series consisting of seven-minute long Cree language lessons.

On a small couch a Cree moshom, or grandfather, played by Morris Cook teaches his granddaughters, played by Claire Walker and Mya Hoskins Fiddler, how to speak their traditional language the way he was taught – through story.

All the characters are first-time actors and they practice each line until they get it right.

Cook has a doctorate in education and speaks four dialects of Cree fluently. He saw the casting call and applied. So far he has enjoyed the experience.

For Walker, it was her father Jim who approached her about the film project. She was willing to put in the long hours in front of a camera. As a result of long hours on set, her command of the Cree language is evident.

Producer Lee Crowchild hopes the videos will make their way to schools and children might be able to start the first seven minutes of each day learning Cree.

“My grandson’s generation is more removed from the natural world,” he said. “It’s important to maintain a connection. Some people don’t have access to what some of us take for granted in terms of culture like pow wows and ceremony, so language becomes the one that holds everything together. Language is the great connector that qualifies and quantifies our knowledge.”

In addition to being a film producer, Crowchild is also the former Chief of Tsuut’ina Dene Nation.

He believes language gives Indigenous people the power to tell the stories of the land.

Although Allia Janzen and Kyle Burgess of CSVP are non-Indigenous, their focus is on creating capacity in the film industry by mentoring and hiring Indigenous people.

Eighty per cent of the production staff for “Stories of the North” are Indigenous.

Burgess compares the role between the storyteller and video producer to the relationship between soup and a bowl. He says the story is the real substance that people come to the restaurant for — they just provide the bowl to serve it.

Campfire Stories hopes to bring Indigenous language learning to where children spend a lot of their time and that’s to their devices and online.

Janzen, who is BIPOC, says the company’s core belief is that people deserve to have a voice and to have their stories told and the best stories are told around a campfire.

“I want little kids to say, ‘Hey, that guy looks like my Moshom, that girl looks like my sister or my cousin. I’m represented. That is my language and culture and there is a place for it,’” she said. “We all grew up with Mr. Dressup, so why not a Cree Mr. Dressup?”

“Stories of the North” will be released on CityTV Saskatchewan in early 2023.