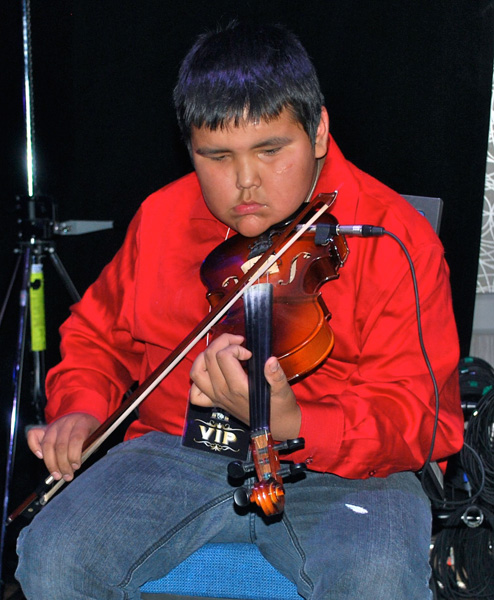 Jonathan Daniels of Pukatawagan, Manitoba performs at the Wanska talent show in Saskatoon.

This is why she founded Wanska Talent, which in Cree literally means, “wake up.”

Carriere founded the new talent agency along with Danny Mirasty and Robin McLeod.

All three are from northern Saskatchewan – Carriere from Cumberland House and both Mirasty and McLeod are members of the Lac La Ronge Indian Band.

Danny Mirasty is also the drummer for the band the “Black Eyed Creez” and the founder of the grassroots “RISE UP” Violence Against Women March.

Robin McLeod is the treasurer and operations manager for the Northern Saskatchewan Trappers Association and has also worked in a financial capacity for the Lac La Ronge Indian Band, Prince Albert Grand Council and Federation of Saskatchewan Indian Nations.

Geraldine Carriere has worked as a CBC journalist, documentary host of the 2013 North American Indigenous Games and is a multi-talented artist.

However, she says her real desire lies in the promotion of Indigenous artistic talent.

“For me personally, I sing and I dance, I am a writer and I think all of us, somewhere along the line someone told us, ‘you can’t do that, that’s not going to make you money,’” Carriere says. “Each of us were told at some point, ‘that’s too frivolous.’ When we turn our backs on ourselves we lose that fire inside. I personally have always wanted to give Aboriginal youth that opportunity that I never got to develop that skill that I really wanted to develop.”

On October 28, Wanska Talent hosted its first show at the Saskatoon Inn with about 700 people in attendance.

Performers included Marty Ballentyne and The Instant Band, Blackrain, The Rez Boyz, The Creez and The Country Rock Company.

“We (Aboriginal artists) are unrepresented in the mainstream media and the arts,” Carriere says. “I think now is the time to rise up and show yourself which is why we say, ‘Wanska,’ which means ‘wake up.’ So it’s all of us who have been hiding themselves, hiding that side of yourself which you wish you could be or do and it’s giving everybody the permission to step forward and do those things that you always wanted to do but never allowed yourself to do.”

Geraldine Carriere says Wanska Talent plans to open an office in Saskatoon in the coming months as well as showcasing Indigenous talent at a number of other events including tradeshows.

She also says the company has national ambitions.